You Will Do Whatever It Takes: This Is Virus By Joe Williams 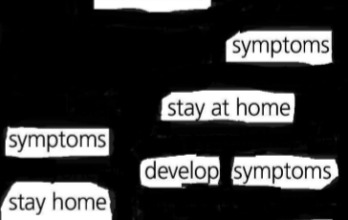 Joe Williams’ ingenious new take on Covid-19, and the government’s woeful prevarication in dealing with it, is both timely and affecting. Taking Boris Johnson’s nationally distributed leaflet as a starting point, Williams’ breaks the leaflet’s text into fragments and rearranges telling words and phrases to yield a ‘found’ poem of heartbreaking guile and wit.

Leeds-based Williams’ commitment to a poetics of conviction is renowned. A performer of real energy, he translates an instinctive empathy into echoing anger, and what his words lose in subtlety they more than account for in unequivocal power. But here is a departure: losing none of his political zeal, This is Virus takes up arms on our behalf through the corrective of clever wordplay and syntactical interchange. The windbaggery of governmental platitude is summarily deflated at point of hindsight.

Joe Williams
A ‘photofit’ of erstwhile vacuous phraseology – the diluted essence of a public information film – is reassembled into nine short soundbites of general interpretation, each originally intended to address one aspect of Downing Street policy. Thus, ‘Stay’, ‘Stop’, ‘Symptoms’ and ‘Support’ are titular headings beneath which Williams’ dissects and entirely undermines any presentiment of rational meaning, offering, instead, a glimpse of dystopia. That Johnson’s tardy and unreliable measures have themselves willed a kind of dystopia into being is one irony among many that This is Virus brings to light.

And the range of juxtapositions work to striking visceral effect which leaves a feeling of emptiness in its wake. Re-calibrated as sometimes isolated, sometimes conjoined mantras, the phrases emerge as newspeak for the ‘new normal’, and although it is possible to direct meaning from random concatenations, Williams’ over-arching invocation remains abundantly clear. 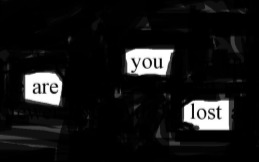 In this way, the inclusive and easy fatuity of the Prime Minister’s opening advice disintegrates as the pages progress, rather in the manner of the government’s actual response. What remains is an open window on a wasteland where confusion and mixed messaging lead to incoherence, superstition and dangerous quackery. ‘Disinfect your family’ from ‘Stop’ becomes a terribly moving sideswipe at Donald Trump’s ‘snake oil’ solution, whilst ‘We must reduce the number of people in order to save lives’ – disorientates syntax to echo the suspicion of an altogether more disturbing utilitarian agenda.

Orwellian Doublespeak is bound to infest a narrative whose subtextual spaces are so relentlessly suggestive, and you don’t doubt Williams’ guiding hand at the tiller. One manifestation of ill-defined instruction is creepily symptomatic of cognitive dissonance - ‘You may work but you cannot work’, or counter-intuition – ‘you should not seek medical attention’. Whether at work, or ill, you may be certain that the power of surveillance, of control, is being exerted: ‘everyone is in our care’, and more tellingly, ‘The Government knows all’.

Behind the pages of prima facie hope are concealed the articles of despair, of Herd Immunity, of Dominic Cummings:

‘you are lost everyone needs virus’.

For more information, or to buy This is Virus: https://joewilliams.co.uk/publication/this-is-virus/


Also by Steve Whitaker...
Poem Of The Week: 'Sonnet 29' By William ShakespeareReview: Ings Strings At Art In The Dale, Kirkby MalhamPoem Of The Week: 'This train has left the city ...' by Paul HenryAlbum Review: Staring At The Sun: Talking About X By JARRPoem Of The Week: 'Giorno Dei Morti' By D. H. Lawrence (1885-1930)