Northern Leaders met last week for a pivotal Board Meeting of Transport for the North (TfN) which could shape the economic future of the Region for generations to come.

Metro Mayors, Council Leaders and representatives of Local Enterprise Partnerships covering the whole of the North convened in Leeds to agree their initial response to the Government’s Integrated Rail Plan.

The TfN Board identified that the proposed Government plan fails in three major areas: capacity; connectivity and disruption.
In proposing a motion that was unanimously supported by the Board, Mayor of Greater Manchester, Andy Burnham said: “As a Board, we have always prioritised east-west connectivity across the North. That is something that unites us. I would say it is the single biggest transport challenge facing this Country. It is not a sustainable situation.

"History would not look kindly on the Board if it just accepted this was all the North was going to get. We have been discussing these proposals for years and what we got last week was a different solution imposed on us without discussion.

The Board resolved to:

Ask the Chief Executive of Transport for the North to prepare a report to the Board on the impact the Integrated Rail Plan will have on the North’s economic and decarbonisation ambitions. 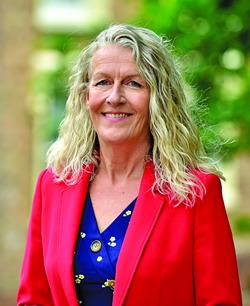 Cllr Louise Gittins
Cllr Louise Gittins, Interim Chair of Transport for the North, Councillor Louise Gittins, said:“The strength of feeling amongst Board members is as strong as any I have ever seen. And while they may be angry and disappointed about what has been put on the table – it is quite clear they still want to find a way forward. These resolutions set the Board’s desire to want to work with Government in determining what that way forward may be.

"The next steps will be crucial to the realising the economic potential identified in the original Independent Economic Review. The Board’s preferred network for Northern Powerhouse Rail reflected that this is an investment in the economic, social and environmental future of the North.”

In resolving its next steps, the Board noted:

The publication of the Government's Integrated Rail Plan and the announcement of associated investment;
That the proposals breach the commitments Government had previously made on Northern Powerhouse Rail, and differ from this Board’s preferred option, as set out in statutory advice to the Department for Transport.

That Government acknowledges connectivity east to west is not only about speed but capacity and connection between towns as well as cities
That, in failing to deal with the infrastructure constraints, particularly around Leeds and Manchester, the plan is the wrong solution for the whole of the North and does not deliver the long-term transformation required to level up the North’s economy
That the proposals would present significant operational performance risks with intercity, regional, local, and freight services competing for capacity on critical sections of shared infrastructure across the North.
That TfN’s preferred option for Northern Powerhouse Rail would provide up to 12 fast trains per hour between Leeds and Manchester, compared to 8 through the upgrade option in the Integrated Rail Plan
That disruption caused to passengers, freight and the economy by upgrading lines is likely to be more significant than that caused by the construction of new lines
That Bradford is the seventh largest local authority area in England by population and its residents currently have no direct rail access to Liverpool, Sheffield, Newcastle, Hull or Manchester Airport​
The importance of Liverpool as a key destination for business and tourism and the insufficient capacity at Liverpool Lime Street Station to support the desired levels of service
That the re-opening of the mothballed Leamside line (TfN’s preferred NPR option) would remove the current constraints of six trains per hour on the East Coast Mainline
The importance of improving connectivity on strategic corridors between Sheffield and Leeds; Manchester and Leeds, and Leeds and Hull.
That there is a need to ensure the city of Hull and East Riding are reconnected to the Transpennine mainline and plans for electrification are reinstated as part of improved East West decarbonised freight and passenger connectivity.

In proposing the motion and recognising the issues, Mayor Burnham said: “What this motion is trying to do is plot a way forward from here recognising we can’t solve everything. I didn’t hear any minister last week saying anything other than cost was the reason why we could not have a new line via Bradford. Now if that is the case – let us sit down with ministers and talk about how we bridge that gap.”