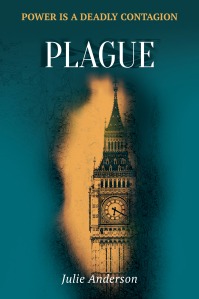 The capital’s population, we are told, expanded greatly between 1500 and 1650 and pre-existent churchyards could not cope with the surge in demand, therefore ‘overspill’ grounds were created.

But, that’s not the focal point because at the same location they have uncovered an impromptu burial site for bodies hastily discarded during one of the historical outbreaks of plague – a discovery that prompts immediate concern to all those present – fear of contagion, despite the bacteria being dead for several hundred years. The spark of terror is exacerbated by the discovery of a very recent corpse, and then to top it off, the cavern roof starts to crumble – it all looks set to collapse.

The events of the opening chapter set the stage for what will become a race against time to solve a crime – a mystery comprising corruption, deceit, sex, scandal and, for the reader, an engaging and highly entertaining drama.

From the dust of the construction site emerges Cassie, our central protagonist, a has-been civil servant with a weighty chip on her shoulder and undoubtedly many an axe to grind. Thrust into the limelight, briefly, as lady of the hour thanks to her calm and authoritative directives issued in the face of calamity, she soon finds herself suspect in the murder enquiry after the discovery of a second body.

Unsurprisingly, this plot development soon gives way to the rendering of Cassie as the hunter rather than the hunted. Whilst the reader might question why exactly this role is assigned to her, we can ascribe it to a world of politics that we will never fully comprehend.

Because this case has implications stretching to parliament and politicians, a strong whiff of scandal and the fear of public perception immediately take to the fore. Due to the crime's connection to the Palace of Westminster and the potential “incalculable reputational damage” it might inflict on those in power, Cassie is appointed unofficial investigator on the case, assisting the police: her brief is centred on “reputation management”. For Cassie, who we know has “pined for her old job like a grieving widow”, this is her chance to get back into a role that matters, amongst the movers and shakers, in a job that commands respect and authority – where she feels she belongs.

Cassie doesn’t inspire a feeling of warmth or empathy, in the opening stages of the book. Instead, to this reader, she comes across as haughty and arrogant as if projecting a persona that is inversely proportional to what she really is, and what she thinks of herself. To the wider world she is a woman of power, but by her own judgement, she is little more than an abject failure.

Her inner thoughts, conveyed alongside her observations, quickly bored me – simply too much self-pity and woe-is-me sentiment. However, as we come to realise, this is a world in which everyone dons a mask – it is a world of projected ambitions, projected personalities and perhaps we as readers are the only vent through which Cassie may voice her thoughts and concerns.

The world around which this plot orbits is a contrivance directed by power, status and the job title of those that inhabit it. And yet we have no sympathy for Cassie, because she is so desperate for a piece of the action – it was once within her grasp, but now, as we are often reminded, it is just beyond her reach. 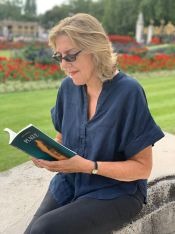 Julie Anderson
The plot moves with pace, progressing like a cog in a well-oiled machine – oil being the operative word given the grease and sleaze exuded by so many of the characters we encounter. A deadline has been set; the case must be solved before the closure of parliament for recess, and the stakes are set high, reputations are at risk and corruption lurks palpably alongside the main thrust of the narrative.

The unfolding plot dictates the pace of the novel, though we learn little of the central characters; they have roles to play but who they are beneath the carapace of cause and effect seems almost to be irrelevant. What we learn is on a ‘need to know’ basis – access to information is determined by rank and we, too, have our place in this system. At times I think the story edges towards the inconceivable, but nevertheless something compels you to keep turning the pages.

The plot, the people and their associations and networks are all as complex as the subterranean labyrinth of tunnels – historic rivers and sewer systems - that become a focal point in the investigation. This is the London of old, propping up the modern city.

Thematically there is an interesting exploration of the clash between customs and conventions of yesteryear and how readily they still influence the here and now. What we glimpse of parliamentary diktat and often unspoken decree involves those more likely to be found nursing a brandy in a gentlemen’s club.

And the minor sub plot of ‘plague hysteria’ fuelled by conspiracy theorists and social media in response to the discovered corpses is perhaps a comment on the power of fake news, exacerbated by the implication that even the media we often trust is not above corruption.

We do slowly warm to Cassie and we are permitted our cynicism in response to her world. She joins a launch event, at which “the great and good were in attendance”, ascertaining when and how they could “barter their knowledge and influence for tangible rewards”. The scene is a manifestation of everything we despise about the corporate world: the lift doors open to “the sound of artificial bonhomie, of commercial dealings well lubricated by alcohol and the promise of serious money to be made”.

Plague is an apt title: beyond the murder investigation, the book explores the corruptibility and the immorality that appear rife in certain circles, and it touches thematically on topics that could well be acknowledged as a plague of the modern era. The world under investigation by Cassie and her police associates is one that is beyond most of us: one in which people still employ manservants, one in which conceit is dressed in the finest tailored suits, oozing charm to mask the inherent sleaze, all tied up with undeniable sexism and the acknowledgement that power really is king.

And of course, there is the sex. Sexual lust, one might argue, is just another manifestation of greed and the pursuit of personal gratification. However, the focus extends further – as in many good crime dramas, there is room in the narrative for the introduction of a love story, however out of place it may seem.

Plague, as a crime novel, delivers on many levels, and though I am obliged to confess that I am not a fan of crime fiction, this one had me hooked. Enjoyment demanded a suspension of disbelief; a disavowal of notions of plausibility, and abandonment to the unalloyed pleasure of pure fiction. This book might easily be transformed into TV drama: the dialogue is on point and the characters could have been made for the screen. The plot contains all the right ingredients: it is gritty and gripping, carefully blending mystery and intrigue, power, scandal, money, sex and corruption.

Plague is a heady, enjoyable romp that propels you towards a dramatic denouement without skipping a beat; for lovers of crime fiction, this is one I would recommend.


Plague is published by Claret Press


Also by Caroline Spalding...
Interview: Bethany CliftReview: Ordesa - Manuel VilasLast One At The Party By Bethany Clift: A Review'There Is No Such Thing As Fate, Because There Is Nobody In Control': My Name Is Monster By Katie HaleHeritage Walks – Roche Abbey