Laughter In The Dark In Leeds - From The Devil’s Jukebox

My quest to discover more about Leeds’s ‘Hokum Band’, the sensational Devil’s Jukebox, takes me to Armley and into the intensely interesting company of two of its founder members, Dr. Ezekiel Bordello and ukulele-player, Professor Lotus Dubois. These are not, alas, their real names - but in keeping with the endearing eccentricity and quirky freedom of spirit of the whole band and its music, they have somehow grown into them, cultivated their persona, assumed their identity almost. 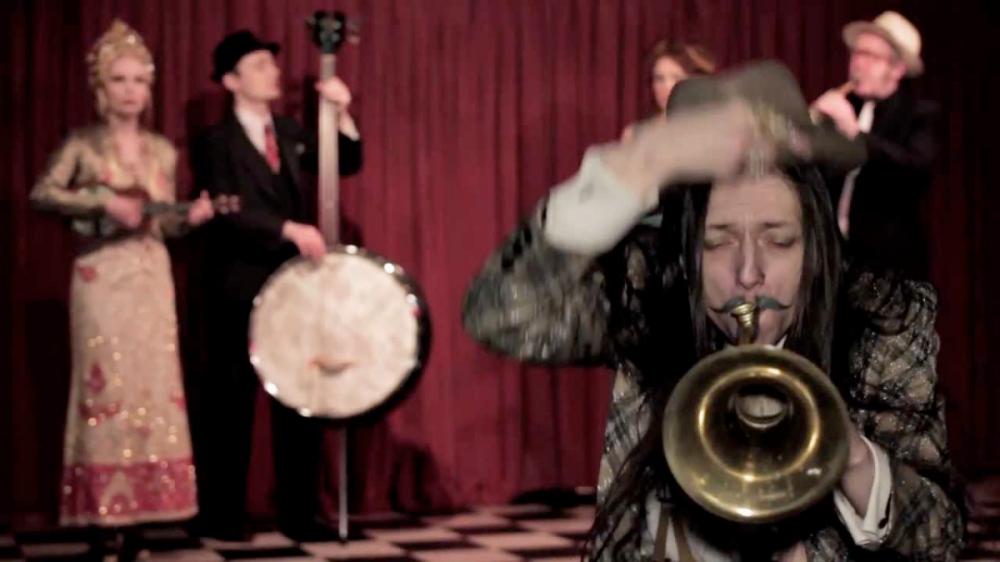 Together since meeting at university in the 1990s, they contrive to suggest they are leading the jazz life or an imaginary version of how it might have been led in the 1920s and '30s by those who played in the stews and sporting houses in America – led a seedy lotus life in the bordello, so to speak.

The band’s act which in particular creates the steamy atmosphere of New York and Chicago gin-joints and rent-house parties, the poor man’s Vaudeville, is almost as much about performance as it is about the music. You need to see it and can do - lots of it - on YouTube

"We always wear colourful edgy period clothes," Lotus says, with a degree of pride. "Yeah people think we dress up to go on stage," Zeke asserts with feeling," but we don't: we just wear our normal clothes!" They laugh cheerily. 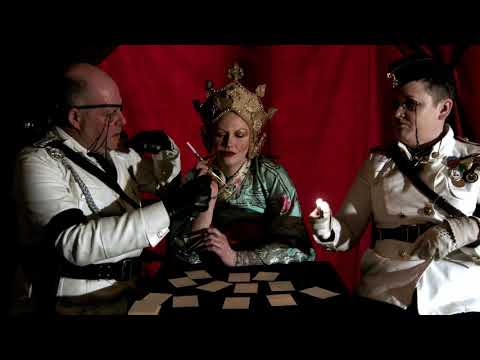 The other three members have aggrandised themselves with similar costumes augmented by Temperance Seven-style titles. Who would ever have thought that veteran reed player, the Reverend Jim Lodge, so long a fixture on the Leeds' Trad Jazz scene, notably with the Ed O'Donnell Band in the 1980s and 90s, would in later life have got religion and entered the church? On bass banjo we find Sir Pinky Camber-Sands and on wheezy harmonium, suitcase drums and ironing board, Scarlet Bonansea.

You get the picture: they are not to be taken seriously. Yet they should be because, as their latest CD, Laugher In The Dark, attests they create a good vibe, infectiously jazzy, bouncy and pulsing, always richly entertaining. And they have played their low-down sensuous stuff in some pretty high-class joints in London, where it goes down a storm, as well as at jazz clubs around the country.

Trying to pin down where their unusual take on music might have originated, I probe further. The first band of Zeke and Lotus was, apparently, an experimental affair: they mention the bands Suicide and Chrome as influences. I look askance. This, it seems, was followed with a Stooges-esque Garage-Punk band called Mondo Suave, which already featured Jim on saxophone. When that ended, they started the Jukebox, originally without a bass player until singer-songwriter David Broad joined them on washtub bass, before the current line-up solidified as a five-piece. They mainly played cabaret gigs at that point, catching the Burlesque revival in the early 2000s before becoming a stalwart of the Leeds Roots’ music scene


Also by Andrew Liddle...
Beatrix Potter – A National Treasure In The Heart Of LakelandAlbum Review: Strictly Victor Silvester & His Ballroom OrchestraJazz Album: Hot Lips Page: A Retrospective PerspectiveThe Haworth Home Guard Is Gearing Up For ActionThree Billboards Outside Tin Brook, Stockport
All this is a new world to me but I recognise and rejoice in their current sound which Zeke tells me with some panache, "takes us back to the houses of ill-repute where it was first played and sung." I’ll say it does. And Zeke’s sinuous voice which slides effortlessly through styles, registers and tempi really is irresistibly appealing. He specialises in ironic parlando asides delivered in scoffing tones, bringing a hint of the strutting leering pantomime villain to the bandstand, but he can sing all right, has the feeling, the genuine unaffected mastery of the Jazz inflections that can neither be counterfeited nor suppressed.

I’ve been racking my brains to think of whom he reminds me and eventually conclude, as I metaphorically swirl the good wine, take in its heady aroma, that I’m getting at first taste hints of a fruity George Melly blended with a nobly earnest vintage of Tommy Johnson.

Though actually generally finding his material in earlier times, Zeke likens himself to the Blues shouters, Wynonie Harris, for example, of the 1940s, and I can see why in vocal colour and delivery. Yet he has a softer, appealingly lyrical side which we hear in such as the rather lovely Dreaming in Blue, so good that he reprises it later.

A published novelist, he enjoys adapting lyrics or writing new ones for many of the songs he sings. Sweet Sue, for instance, has become the world-weary It’s True.

As they play me these joyously liberated tracks I hear the real stuff; they overflow with the darker feelings of the Blues, the bright buoyancy of Jazz of the classic period.

The Mississippi Cathouse Blues terminates in an ironic Jimmy Rodgers’ blue yodel. When the Levee Breaks, first recorded by Kansas Joe McCoy and the immortal Memphis Minnie in 1929, is a Blues moan, a long and sustained cry of pity and despair.

Their most requested song, sad but catchy, is The Ballad of Calico Jones. Delivered in angrily dramatic tones, it is the odd one out belonging to the early 1970s and telling the haunting tale of someone from Calico, a ghost town in a California desert. The Shanghai Mess Around is a lovely piece of music which haunts long after the CD is back in its housing.

A remote cousin of Lotus - perhaps - might have been the notorious Reverend W. E. B. DuBois, a leader of what has come to be known the Harlem Renaissance. Throughout the 1920s, it was an intellectual, social, and artistic movement based in the Harlem district of New York but not all its leaders approved of Jazz. DuBois, who was said to prefer Beethoven and spirituals to jazz, might well have been one of the many calling the new sensation sweeping the country the Devil’s Music.

Joking apart, I’m sure Lotus did not name herself after this gentleman but what a delicious irony if she did!

This, the Devil’s Jukebox’s fourth CD, recorded this summer, is selling well. It can be bought on their website:
https://www.devilsjukebox.co.uk/store-1