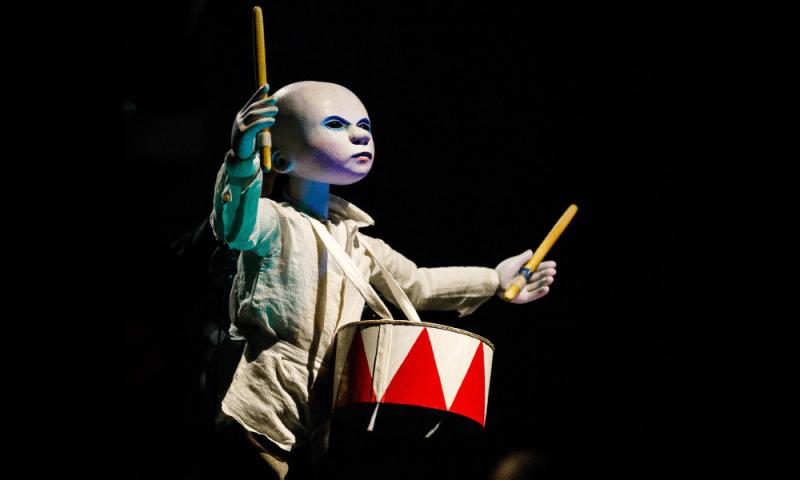 When Gunter Grass wrote what is regarded by many academics as one of the twentieth century's greatest literary works - The Tin Drum - there was another school of thought that believed his genius lay in his surname, and that he was smoking too much of the wacky backy when he put pen to paper!

So, it is hardly surprising that this Kneehigh / Liverpool Everyman production of the master's 500-page tome, lands somewhere between a Monty Python film and a Salvador Dali painting in terms of baffling the discerning public.

And yet it is perversely intriguing!

Gunter only died in 2015 but is probably best remembered for his widely acclaimed novel, which follows the fortunes of Oskar Matzerath, narrating a period from the conception of his mother in 1899, via his own birth in Danzig, Poland, in 1924, to his thirtieth birthday in 1954.

Only Oskar is locked in the body of a three-year-old child from which he describes and observes some of history's major events including Germany's Crystal Night pogrom, the outbreak of World War II and the failed defence of Danzig's Polish Post Office.


Also by Phil Hopkins...
Dream Turns Into Sound NightmarePillow & Michelin Menus For Ella Resorts’s New Greek Property!Five Summer Highland Flings In Bonnie ScotlandWindermere Summer Lakes Escape - OfferHiking Through Shakespeare Country
Heavy? It is. One more thing, the opening sentence of the novel also places its narrator in a mental hospital so, if you do manage to get any modicum of story clarity, rest assured, you'll go home with a few question marks swirling round in your head.

But, Mr Jones the builder - my companion for the evening - summed proceedings up well. "It were great that, but I hadn't a bloody clue what it was about."

This production - somewhere between a disturbing synthesised musical, drama or opera (I kept listening out for Gary Numan's 'Are Friends Electric?') - is an intriguing offering from the West Yorkshire Playhouse.

Surreal, confusing and, at times vexing, The Tin Drum leaves you somewhere between bewildered and baffled, raising more questions than it answers.

And maybe that was Grass' genius? He asked questions and provoked thought but left readers to find their own answers, however, his literary legacy is that he wrote a 1959 classic that raised a mirror to the eyes of a nation and forced them to look at themselves.

There were some genuine laugh-out-loud characterisations in this production - the affectionate gurning of Beverly Rudd as the Rural Constable and an oversized wailing baby - Rina Fatania as Anna Bronski, eternally producing items of interest from her flouncy skirts.

But it was those caricatures that propelled what was essentially a dark offering, forward. It was as if Director Mike Shepherd was desperately throwing pieces of meat to the audience with the veiled promise of 'stay with me, have a laugh, it will all become clear.'

And throughout there was Oskar, a puppet straight out of Munch's The Scream, and his ubiquitous drum; a comfort blanket, an instrument of protest and a warning to the world.

Clear? Well it is and it isn't; as clear as a bell on a foggy night! Enjoy? Well, you do and you don't; like Marmite.

But, The Tin Drum certainly makes you think, with Malcolm Rippeth's brooding lighting design, a permanent reminder of the dark nature of this production.

For those who have read Grass' novel it will be intriguing to see how writer Carl Grose has distilled the original work down into a two-hour play-cum-musical.

But, whether you have read it or not, this is a production that you will love to hate because it raises more questions than it answers. It is confusing in a positive way in that it throws your senses into turmoil.

Certainly not an evening of light entertainment but, once in a while, we need the grey matter stimulating because Corrie, Emmerdale and Casualty can only do so much.

For those who love a theatrical challenge wrapped up in a conundrum, The Tin Drum will deliver.