At Home In Grasmere: Vital Stream By Lucy Newlyn 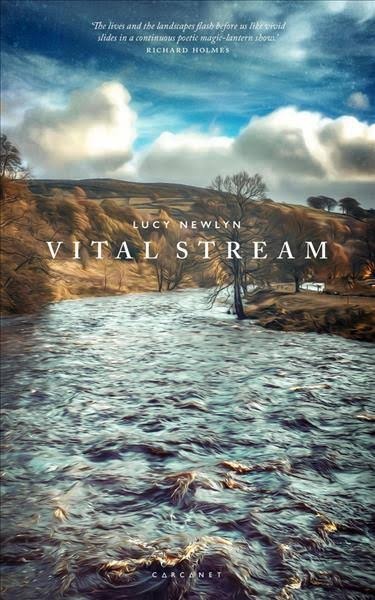 There is an authenticity to Lucy Newlyn’s magnificent new reworking of William and Dorothy Wordsworth’s elemental outpourings of 1802 which has less to do with faithfulness to language than to the nuances of their profoundly unusual relationship. Her attention to detail in this lengthy series of sonnets is nothing short of phenomenal, her affinity with the Wordsworth’s writings predicated upon extensive research. Newlyn’s compendious academic knowledge of the Romantics is evident at every turn, and she has found a form that gives precise definition to the ambiguity of the siblings’ relationship, and to the pyrotechnic figurative propensity of the landscape they understood by instinct.

Finding a trajectory for her linear narrative in the plethora of extant prose and verse, Newlyn fleshes the bones of the past with utter conviction. Here, she re-imagines Wordsworth’s contemplation of the sonnet’s formal unity in the extended metaphor of a dewdrop:


‘Translucent, with the endless purity
Of mountain brooks, the flawless unity
Of a reflected world in miniature;
That even in its trembling brevity
Might gather to itself a quiet store
Of certitude and hang there poised, replete
With meaning – self-sustained, complete?’ (‘William, Seeking a Perfect Form’)

The delicacy of expression echoes Alexander Pope at his most distilled, and it is a testament to Newlyn’s insight that Wordsworth was deep in tonal thrall to the earlier poet. The image is apt and luminous; the steady iambic metre which helps to make it seem ‘self-sustained, complete’ gives three dimensions to the brother and sister throughout the collection. These are poems of mood ambiguity, of unexpected warmth and generosity, of philosophical differences, and of a love undermined by the many years of separation prior to the reconciliation at Dove Cottage – ‘The wound from parting when we were so small / Has never healed’ (‘William, on Separation in Childhood’). The re-appearance of his former inamorata, Annette Vallon, and the presence of his betrothed, Mary Hutchinson, cast an inexorable shadow over the symbiosis of love binding brother and sister.

Lucy Newlyn
Other players in this drama of co-habitation, frenetic creativity and sporadic anxiety, also feature in the first person. Using fragments of poetry and prose to give both context and shape to her own poems, Newlyn calls on the Coleridges, now ensconced at Greta Hall in Keswick, to examine their rapidly disintegrating relationship. And it becomes clear that the poet’s solipsistic energy, overwhelmed with tinctures of laudanum, is utterly alien to Sara’s instincts for practicality – the sensible rearing of children and the needfulness of stability. Her quotidian concerns are death to her husband’s spirit, more still the incarceration of a marriage which will prevent an imagined consummation with his beloved Sara (‘Asra’) Hutchinson. Lucy Newlyn’s dissection of the dramatis personae is as plausible as only personal confession may realise. Her invention bears the fictive authenticity of a lengthy series of asides. As effective as Hilary Mantel at evoking an eavesdrop, Newlyn privileges the reader’s suspension of disbelief by rendering the effect of lives just lived. To this end, her meticulous attention to the formal elegance of contemporary language allows the occasional intrusion of a modern expression, which has the effect of authenticating, rather than otherwise, the prevailing domestic dynamic. The pinched, self-lacerating ‘Coleridge, on Wordsworth’s Women’ imagines a ménage, presumably comprising Vallon, Dorothy and Mary, into which his own bitterness seeps, yielding, instead a persuasive mea culpa of the poet’s asinine and childish jealousy:


‘And what about his former bit of fluff?
Imagine Town End as a meek harem –
Three wives is surely ample; must suffice
To constitute a selfless loving team
And service all the poet’s needs. How nice’.

And although Coleridge could have no awareness of what would in a much later period be defined as a psychiatric condition, his unwitting recognition of his own symptoms, in a response to Wordsworth’s sense of wonder at closely observed natural phenomena, is a persuasive corroboration of the power of endogenous depression to colour, if not to thoroughly undermine, the poetic sensibility. It wouldn’t be the first time that Coleridge demonstrated a remarkable prescience, but his proclivity for levelling sardonic acidity at his friend in fact masks a profounder existential unease:


‘I look around me here and feel no joy,
No animation: true ebullience springs
From deep within. The living world can bring
No consolation.’ (‘Coleridge Responds’)

‘True ebullience’ emerges from within, as does its converse: think Kierkegaard, or the Tennyson of 'In Memoriam’. It is characteristic of Lucy Newlyn’s assiduity that her work is a treasure trove of inter-contextual, inter-textual suggestion. Her use of several sonnet forms – outlined in a genuinely instructive Introduction – gives latitude both to a Romantic formalism, and to her own propensity for finding the most suitable vehicle for expression. She, like the poets who are her preoccupation, is not imaginatively constrained by the mechanisms she employs: mood is unburdened in precise accordance with the burgeoning, or diminishment, of that of her muses.

The ‘altercation’ between William and Samuel continues, in depth and delicacy, bearing within its compass the nature and limits of introspection, the dignity of simple labour and the gaining of ‘true vision’ through abandonment to pure imagination. And it is to Newlyn’s huge credit that she gives wider context to these speculations by accretion: the failure of the Revolution in France, alongside the depredations of age and experience, coalesce to inform the poets’ own internecine conflicts.

The philosophically serendipitous re-emergence of the figure of Annette Vallon, a time-delayed bomb dropped in the parlour at Town End, could not but add to Wordsworth’s daily fretting: their child, to some degree a symbol of an unchained confraternity steeped in revolutionary ardour, must have been a profound embarrassment in the genteel and mannered milieu of Grasmere, and it is well that Newlyn disturbs the fabric of male hegemony by including the thoughts of the ten-year slighted Annette and their daughter Caroline, together with those of ‘Asra’ and Sara Coleridge. Newlyn is keenly aware that Coleridge’s untenable and unhealthy obsession with Asra bears echoes of Wordsworth’s early indiscretion in France. The difference is one of measure and principle, and it is characteristic of Dorothy, in the wake of a visit to Gallow’s Hill, that a heartfelt lament for the absence of Coleridge is tempered, in an epigrammatic couplet which is Augustan in tone, with an invocation to self-control:


‘Most men are not themselves when deep in love.
Restraint must cure what time will not remove.’ (‘Dorothy at Gallow’s Hill, Missing Coleridge’)

This is well judged; the ongoing guilt-anxiety of Wordsworth, whose active sense of duty vexes his relationship with Mary, upholds an integrity which contrasts markedly with Coleridge’s mercurial unpredictability. Wordsworth’s writings reflect an unease which shadows his every move, not least when he ventures to Calais via London in the company of his sister. A re-imagined epiphany on Westminster Bridge, which gives clear provenance for the eponymous poem, adopts a more profound elegiac tone in the context of the meeting which will soon unfold in France. The new-born face of Caroline stalks the deepest recesses of Wordsworth’s contemplative imagination as efficiently as the ghost of the Revolution which held so much promise for the youthful poet, then failed, like life, to fulfil its own mandate: ‘Unknown, imagined, still about to be’ (‘William, on Leaving London’).

Lucy Newlyn’s fine volume of historical fiction wears erudition lightly, but the burden of an encroaching future, like an ice-rigid greatcoat on the Eastern Front. If we sense a shadow in the unsettling brilliance of this small group of literary lives, in the diversions, reconciliations and unresolved dramas of charmed existences, it is of a future which will gradually detach object from subject as hope fades and imaginative focus clouds. The receding into flaccidity of the priapic blandishments of 1789 is a neat metaphor for the loss of contemplative clarity that naturally accompanies the ageing process. Wordsworth’s ‘visionary gleam’ cannot sustain, and it is fitting that Newlyn acknowledges the poet’s inference of diminishment and occlusion, even at this relatively early stage of his writerly existence:


‘ Oh! to find
A method for recovering pleasures
That still lie hidden, buried deep within,
And catch them butterfly-like on a pin,
Lest we lose what our heart most treasures!’ (‘William, on Sharing Memories’)

Vital Stream is published by Carcanet.


Also by Steve Whitaker...
Poem Of The Week: For M., In England By Matt BroomfieldThe Swamp Ghosts Of Pripyat: Stalking The Atomic City By Markiyan KamyshThe Endless Opportunity Of Words: Lanyard By Peter SansomPoem Of The Week: Wheel By Stephen DeePoem Of The Week: The London Dinner Party By Jayne Joso