The Yorkshire public know her work best in the stunning Public Art trail around Hornsea which she created last year to commemorate the town's famous former pottery. In the contemporary art world, Adele Howitt is one of the country’s best known and in demand ceramic artists. She has become synonymous with large-scale architectural artwork projects in the public realm, innovatively revivifying such places as hospitals, schools and forgotten industrial areas. Her creative experimentation with ceramic form has led to exhibitions across Europe. 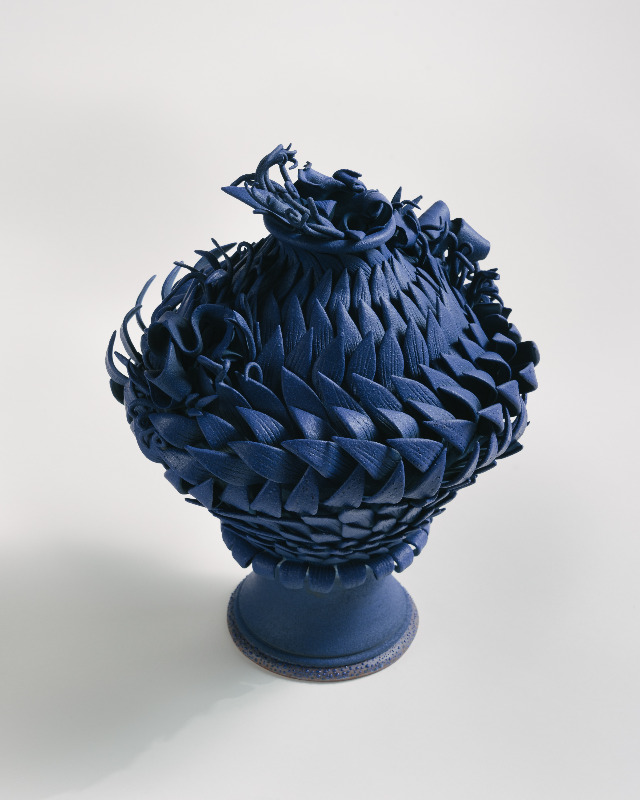 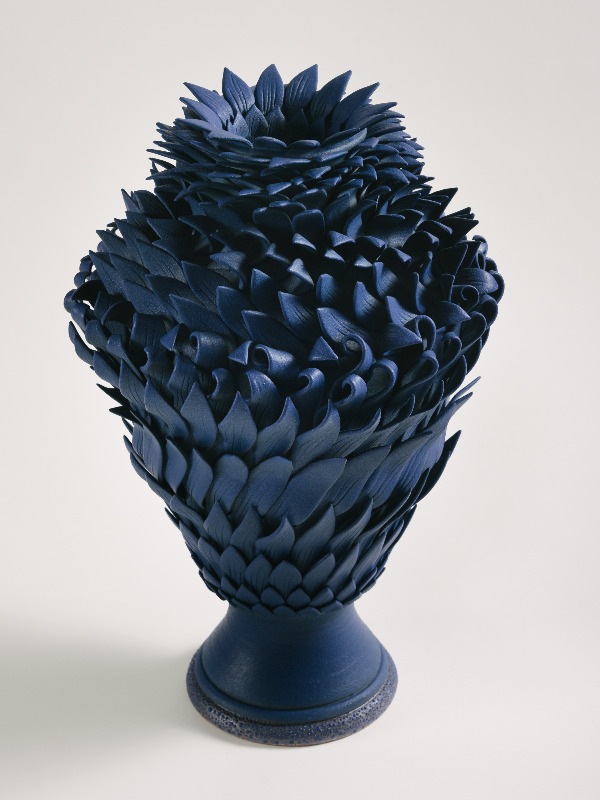 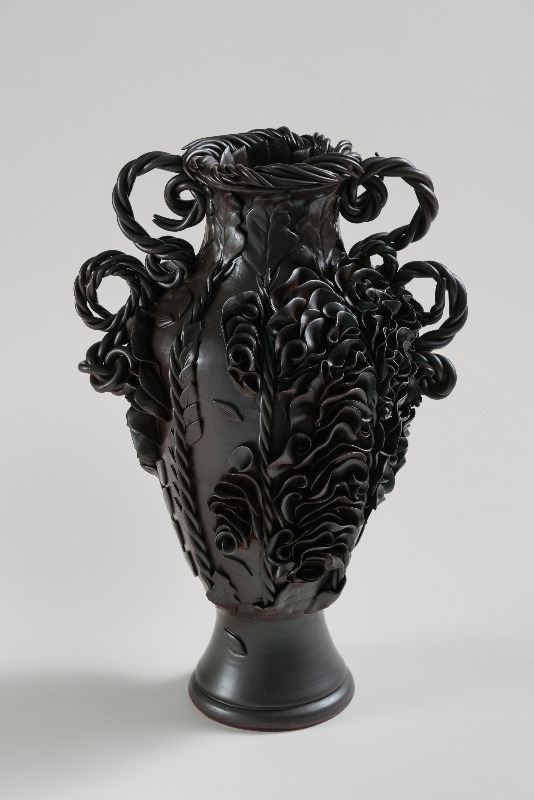 Lists can be tedious but sometimes necessary. The sheer scale of Adele’s exhibitions is quite stunning and includes the Steninge Slott Cultural Centre, Stockholm, Sweden, VI Biennal de Ceramica del Vendrell Barcelona Spain, Ceramica Multiplex at Kerameikon Croatia, The London Design Fair, various RHS Gardens including the Chelsea Flower Show, and the British Ceramics Biennial 2017. Her ceramics can be found in Museum Collections in places ranging from Teipei to Barnsley to Croatia and beyond.

She has worked as an independent designer and educationalist for more than a quarter of a century and is a strong advocate for the arts within regeneration. In 2009 she set up the first ceramics and print-making studio and gallery called Studio Eleven in The Fruitmarket, the burgeoning new cultural quarter in Hull, and was one of the lead partners for the City of Culture Bid of 2017.

Her most recent exhibition is at the Saul Hay Gallery, that delightfully distinctive red-brick independent gallery accessed by a private bridge in the Castlefield area of Manchester. She has a number of admired terracotta, porcelain and ceramic pieces in the Form exhibition put together by the owners, Ian and Catherine Hay, their first-ever dedicated solely to sculpture.

The beautifully sculptured pieces in white, dark cherry and blue are part of her Hinterwater Project, inspired by a waterside setting, the Aire and Calder Navigation canal, which she is particularly drawn to and which we discuss at some length. ‘The canal, which links the Humber, the Ouse and the Don, facilitated the development of the South Yorkshire pottery industry in the eighteenth century’, she says. ‘The man-made network of waterways allowed barges to carry works from famous potteries such as Rockingham, Kilnhurst and Mexborough to the ports of Goole and Hull to export around the world.’ 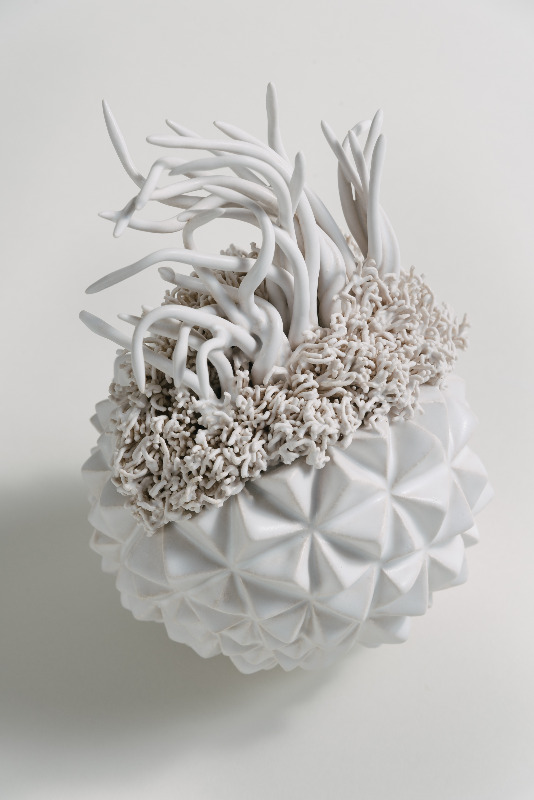 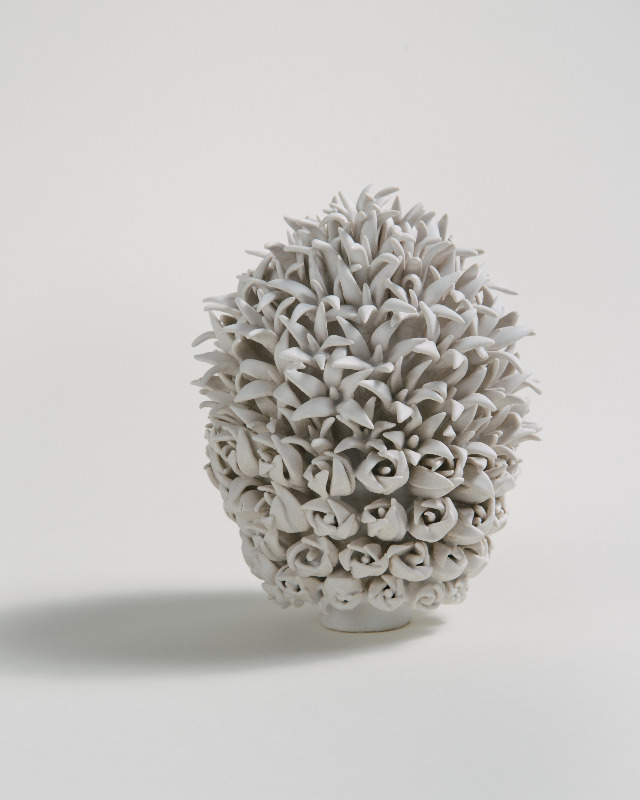 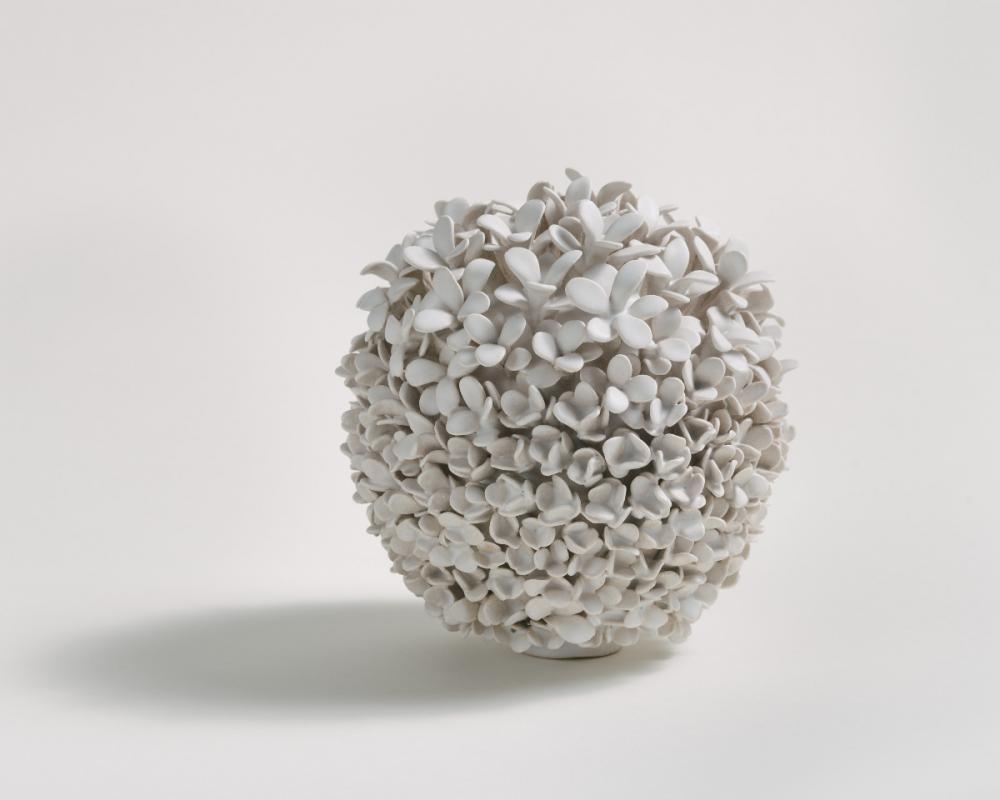 A particular inspiration for her new collection is the recent emergence of new wild flower and grass habitats along the route as nature reclaims what was lost during industrialisation. Adele finds this particularly poignant and inspiring. ‘The melancholy feel of the canal's faded industrial history,’ she says with feeling, ‘is now being brightened by an explosion of natural wildlife. My new work aims to capture both the industrial past and allude to the contemporary globalisation which has led to its next environmental phase’.

The irony is not lost on her that the pottery carried on this very waterway in the eighteenth and nineteenth centuries canals displayed idealised Neo-Classical landscapes of the sort that never existed and were vastly removed from the industrial pollution that set in train a process that today has turned full circle. ‘My collection celebrates today’s wild and living landscape and heightens awareness of the importance of necessary pollinators, and the dangers of global pollution and environmental change. It commemorates the living landscape at a critical change for the environment.’


Also by Andrew Liddle...
Jazz Album: Hot Lips Page: A Retrospective PerspectiveThe Haworth Home Guard Is Gearing Up For ActionThree Billboards Outside Tin Brook, StockportDoors Opening For The Georgian Theatre RoyalAnd Then There Were Two
Adele was born in St Anne’s on the Lancashire coast but was raised in the Cookridge area of Leeds and attended the Jacob Kramer Art College (Leeds College of Art). After graduating from the Chelsea College of Art, in 1993 she opened her own studio on London’s Portobello Road, working with regeneration companies, galleries, and exhibiting in the South East. She returned to Yorkshire in 2002 and worked on a number of projects, several of which were connected with local primary schools. It was a particularly good move for her. ‘I now live and work in Hornsea and Hull - the area is my artistic home,’ she says while waxing lyrical about the city’s manifold attractions.

If you can’t get to Manchester to see Adele’s work, how about a daytrip to the lovely seaside town of Hornsea, where you will be greeted by her vividly orange Murmuration Monument, the first of several colourful mementoes scattered throughout the town to commemorate the town’s once world-famous pottery.

Adele Howitt’s work is on display at the Form Exhibition at Saul Hay Gallery, Manchester, until the end of November.
See: https://www.saulhayfineart.co.uk/
More information on Adele Howitt and Hinterwater can be found at: http://studioeleven.co.uk/hinterwater/