The Wingless Wasp: Significant Other By Isabel Galleymore

Isabel Galleymore
The significant others of Isabel Galleymore’s fragile and beautiful universe – the eight million species of our cohabitation – are receding; they flicker diminishingly like a lightship at distance, their luminosity brilliant but faltering. Their existences unfold without sentience but in irresistible technicolour, until we underwrite extinction with the blind exigency of supply and demand as though we, ourselves, were insentient, without foresight:

‘Succession’ appears towards the end of this book as a kind of warning: we ignore the delicacy of eco-systems at our peril, or the lambency which illuminates these wonderful poems will honour only its memory. Galleymore never misplaces a word; the concision and dense packing of these short journeys yield bursts of insight which transcend meaning. The ‘methodical’ taking down of trees forms an inventory of indifference, a quantifying of destruction as perverse as a clerk keeping a ledger at Auschwitz.

Water is the poet’s frequent recourse: light winking through a rockpool capturing the punctum of moments that feel the more extraordinary because inherently evanescent. Galleymore’s images are fecund, metaphor-rich affirmations of teeming oceans where brutal evolutionary imperatives occur unnoticed, except to the poet’s forensic eye. The recumbent ‘Starfish’, who ‘creeps like expired meat’, is a behemoth in her own element like Ted Hughes’ pike. Her subjugation of an immobile mussel is played out with clinical efficiency:


‘   Into this cleft
she’ll press the shopping bag of her stomach
and turn the mollusc into broth,
haul in the goods and stumble off,
leaving a vacant cubicle,
a prayer come apart.’

The closed ‘confessional’ of the mussel’s shell is prised open a fraction, rendering the violation and sundering as shocking as a denial of absolution. Galleymore’s eye for detail, and for identifying the best means of describing detail persuasively, is stupendously effective. Molluscs and crustaceans are writ large here, in elementally steroidal likenesses which fill the page with their eviscerated interiors, as though under a microscope. We are witnesses to organisms whose claim to parity is underwritten by the strange and colourful bounty of their existence. When the invisible are made visible in clothing as diverting as this, the poet fulfils a mandate no less astonishing than David Attenborough’s:

Such exposure reveals a wide-eyed fascination with the architecture of biological detail for its own sake, and it seems likely that Galleymore’s work with the Tambopata Research Centre in the Amazon rainforest has strengthened her grip on the imperatives which drive both visual awe and ecological concerns. Poems provide a serviceable amalgam, a means of persuasive expression through the absorption of highly-charged metaphorical images. And shades of Pascal Petit’s mysticism animate the interstices of Galleymore’s thinking with brio and anticipatory moment:


‘It’s leaf-nose o’clock. The pink toes are poised.
In the dark understory, the wolf with eight legs
dines on the harlequin’s long eyes.
A whip on the floor, a whip on the limb.
The bush-master waits.’ (‘The New World’)

Unusually poised in a mellifluous narrative flow, ‘The New world’ bears the conspicuous weight of expectation in its measuring of silences between phrases. And sometimes Galleymore need say little else: many of these fine poems are complete unto themselves, her skill at visual representation so convincing as to absorb the reader utterly. 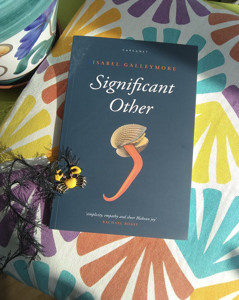 Her instinct for anthropomorphism – she commonly expresses the animal world in terms of human attributes – serves the twofold purpose of yielding convincing description whilst hoving a further significant other, the human, into her field of vision. The frailty of judgement, the inadequacy of relationships, and emotional anxiety all fall within the poet’s compass here. And love, too, as expressed through the medium of a landscape in which Galleymore finds an extraordinary suggestibility. The overlaying of the inanimate world with a resonance of the human seems effortless to an imagination weaned on a sense of indivisible connections. The two blend, often symbiotically, making a savage paradox of our propensity for ecological dereliction and unregulated abuse.

The irony of an ash axe handle made to enable the felling of trees, themselves sown by the tree from which it is produced, becomes a figure for the narrator’s rumination in the exquisite short poem, ‘The Ash’, where the turning of a loved one’s spoken words over in her mind is also the artisan labour of woodworking. And elsewhere, susceptibility to love is abandonment, a kind of inevitable collapsing inwards, here pivoting on the ambiguity of the words ‘felling’ and ‘falling’, where the fall into love is a condition, and embodying, of flux, as much as the evolving of landscape in the shape of a now pavement-covered ‘yawn’ of a tree bole:


‘I end up searching
for some past felling,
an old yawn in the earth –

although i’m told the only chance
of love is via falling.
How easy it is to walk past.’ (‘A Stranger’)

Walking past might sometimes be the best option. The cornucopia of kitsch which makes up the bulk of Galleymore’s fine sonnet, ‘Examples Include Celine Dion’s “My Heart Will Go On”’, is overturned, in the final triplet, by an indirect address to those who are blind to the fleeting nature of love’s raddled tenure:


‘Oh people in their cars and kitchens
singing of forever and always...
Really! You have to feel for them.’

Also by Steve Whitaker...
Poem Of The Week: 'Fox' By Graham MortAn Unreliable Narrator: The Outsiders By James CorbettPoem Of The Week: 'At The Juliet House, Verona' By Chrissy BanksPoem Of The Week: 'Hunt' By Róisin TierneyA Spell For The Departed: How To Burn A Woman By Claire Askew
This rare polemical diversion need not undermine the poet’s point: degrees of human separation, which are as inevitable as the obedience of the barnacle to its instincts, are only denied by the credulous and the sentimental.
But the mutability of forms is rendered extraordinary in Galleymore’s handling. Her finding of conducive facsimiles for human action in the non-human world everywhere underlines a recognition of mutual interdependency; her skill is both intuitive and revelatory. That we exist in quixotic and colourful isolation should never impede our sense of awe, or our commitment to harnessing that fascination in constructive co-existence.

Significant Other is published by Carcanet.
For more information: https://www.carcanet.co.uk/cgi-bin/indexer?product=9781784107116