The Princess and The Pea- But Not As We Know It!

The cast of the Princess and the Pea. Photo by Brian Slater Photography
It's 11am on a Tuesday and I'm surrounded by around thirty five year olds; possibly the only reason I would ever put myself through this (no offence kids) is for a Tutti Frutti production at York Theatre Royal.

Tutti Frutti theatre company never fails to create inspired and imaginative work and whether you are 5 or 50, you will always enjoy their shows.

Their latest offering, The Princess and The Pea, was written by celebrated playwright Mike Kenny and, true to form, this was not quite The Princess and The Pea and we know it. Although the central storyline was similar to the original fairytale, it was brought up to date with perfectly timed choreography and some hilarious quips.

A particular favourite was: 'why are there vegetables in my bed?!' which had all of the children (and adults) giggling! We also enjoyed Oliver Mawdsley fantastically portraying a Scouse princess adorned in a bright pink ensemble and fake tan. 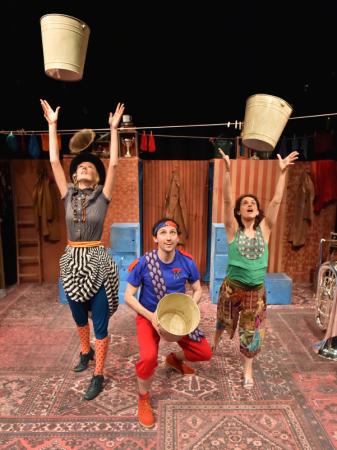 The cast of the Princess and the Pea. Photo by Brian Slater Photography
As always, the small cast of just three had perfected the art of keeping children entertained; from chatting while they were taking their seats, involving them in the storyline and rolling with the punches when one boy from the audience decided to keep roaring at them. Standard.

Although I am a big fan of Mike Kenny's writing, and I appreciate the odd modern reference, I'm not entirely convinced that the feminist twist at the end was necessary for a play aimed at 3-6 year olds but maybe that is the old-fashioned book lover in me (what do you mean my prince isn't going to be rich, I have to get a job and we don't run off into the sunset, get married and live happily ever after?! Gasp!)

All-in-all, another brilliant production from Tutti Frutti at York Theatre Royal and what a lovely way to spend an hour on a Tuesday morning.

The Princess and The Pea will be showing until October 4th and touring until February 2015.