Tales From The Script As Ed Sheeran And Supporting Cast Shine

Ed Sheeran
Those lucky enough to get tickets the Radio City Hits Live concert at the M&S Bank Arena in Liverpool, were rewarded with a concert that was fast paced, entertaining and thoroughly enjoyable.


Joel Corry
With the dream line up of acts only appearing on stage for twenty minutes or so it meant that your favourite act was gone way too fast; though on the flip side if you didn’t like a particular act you were soon put out of your misery!

The next time anyone sees Ed Sheeran they will be sharing the experience with 70,000 other fans at one of his stadium shows in 2022.

Joel Corry seems to have carved himself a name as a respected DJ along with releasing some of the best dance tracks of late. He was perfectly placed on the bill to warm up the audience. Mabel makes an early appearance as she performs I Wish which proved that with the right vocalist it can make all the difference to a track. As the fireworks and streamers engulfed the arena Corry had done his job well.


Ella Henderson
Ella Henderson is probably best remembered from the X Factor. She chooses to perform with a full band which gave her songs a fuller sound rather than it just being a personal appearance. She turned the opportunity into a full blown concert experience. Tom Grennan arrives on stage to duet on the track they released Let’s Go Home Together for a performance that highlighted the two talents. 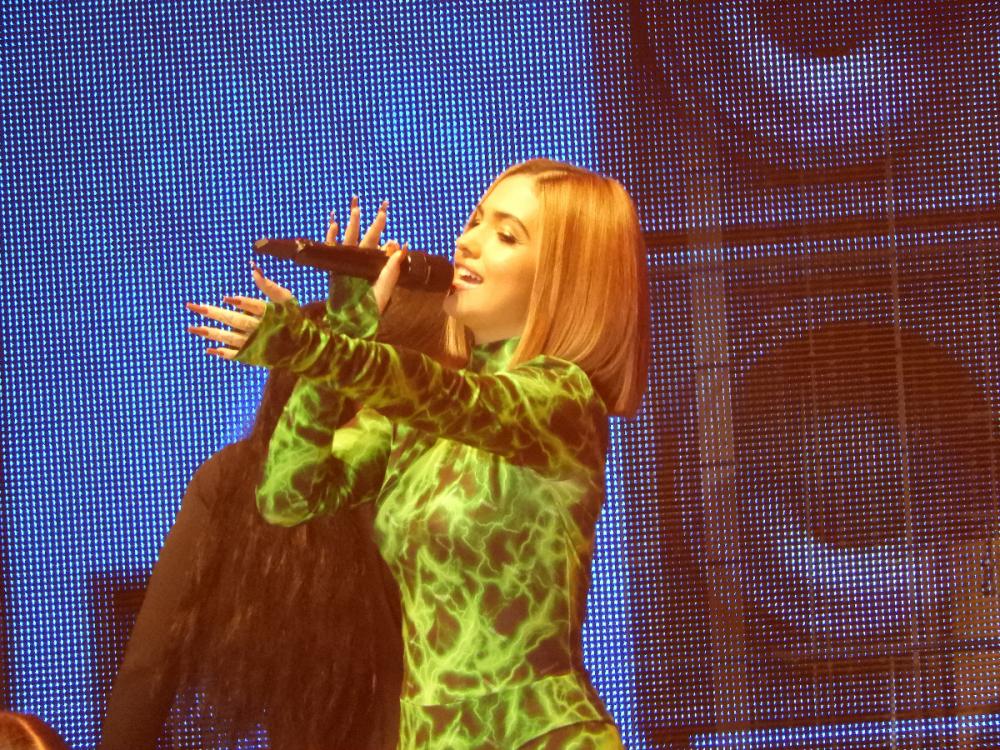 Mabel
Mabel has a good pedigree and it shows: her mother is Neneh Cherry and her father is record producer Cameron McVey. Along with her dancers she gives a polished and consummate display of how to impress in her allocated fifteen minutes on stage. Let Them Know deviates from her usual R&B influenced tracks bringing a house music feel to the evening. Slick and at times sweet she deserves to become an even bigger star.


Tom Grennan
Tom Grennan arrives on stage with boundless energy. With his band the singer proved that with the right songs, good voice and a bit of luck you can go far. Little Bit of Love was a highlight but it was the track he recorded with Calvin Harris, By Your Side which turned the arena into one big night club for a memorable display of pop music at its best.

It was hard not to be won over with the enthusiasm of The Script. The Irish group are masters of how to work an audience. “It feels like we have come home” offers singer Danny O’Donohue to the Liverpool audience. If you did not know The Script it might sound like a load of Irish blarney but those in the know understand that the sincerity of the band is genuine.


The Script
On a full length concert O’Donohue usually goes into the audience to sing with the fans - he was not going to give up the chance in Liverpool, no matter that the band only had twenty minutes allocated. The Man Who Can’t Be Moved turned the fans into his backing singers before Fleur East joined the group on stage for a storming version of Hall of Fame. “We have made so many new friends tonight” affirms O’Donohue on what was the most engaging performance of the night in a masterclass of how to work an audience.


Becky Hill
Becky Hill is fast becoming the most respected singers on dance tracks, rather than being associated with The Voice. Her stage presence now backs up her strong vocals. My Heart Goes (La Di Da) is a dance music banger whilst her David Guetta tie up, Remember concluded a strong performance.


Mimi Webb
Mimi Webb surprisingly is second down on the running order which seemed a bit odd given that she has not had as many hits as some of the other artists appearing. The Canterbury born singer seemed a natural on stage with Good Without showcasing her vocal talents along with it being a track off her new EP.

The next time anyone sees Ed Sheeran they will be sharing the experience with 70,000 other fans at one of his stadium shows in 2022. Tonight though in Liverpool 11,000 fans got to see the world’s current most successful male artist in closer proximity.

“If you know the words to this one, sing along- if you don’t make them up” he suggests as Perfect proved that the audience did indeed know every word. Shape of You led into Bad Habits showing that the power of a good song sung with just a guitar and loop pedal is all that is needed to send 11,000 fans home with a smile on their faces.

After 5 songs Sheeran was gone - the memories of tonight though will live on for years to come.
Also by Graham Clark...
Album Review: Elvis Costello And The Imposters - The Boy Named IfInterview With Tony Clarkin From MagnumAlbum Review: James Blunt - The Stars Beneath My Feet (2004-2021)Sad Cafe To Play Rare Concert In WhitbyInterview With Jean-Jacques Burnel From The Stranglers