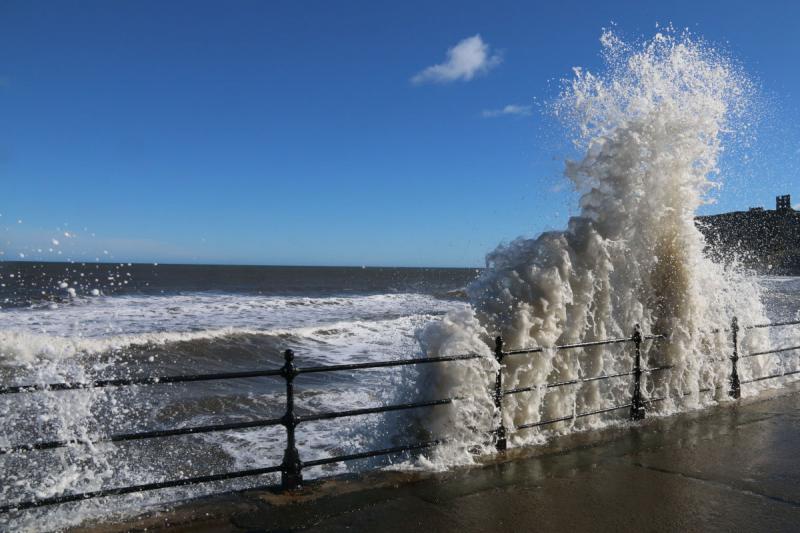 Dramatic backdrop - a wall of waves crashes onto Scarborough promenade. Photo by Steve Hare
Ducking spray from enormous waves, wrapping up for bracing coastal walks and watching seagulls buffeted by gusty winds - the perfect panacea for a winter pick me up.

Being beside the sea has been scientifically proven to enhance our sense of well-being with sunlight enabling our bodies to make vitamin D, helping to absorb calcium, strengthens bones and offsets hypertension.

With endless stretches of coastline across resorts in Yorkshire, Northumbria and Lancashire - and that’s just for starters - we headed for our favourite at Scarborough.

Claiming to be England's first true seaside resort back in the 18th century, Scarborough’s star continues to blaze as bright as ever.

Outside of London, the Borough of Scarborough remains the most visited holiday destination in England according to data from Visit England in 2018.

Its 42-mile coastline takes in Whitby and Filey - the latter which was named ‘Britain’s Best Beach’ in 2018 by The Sunday Times when its magic blew away travel editor, Chris Haslam, who said it transported him back to his childhood.

There’s nothing like a winter walk to blow away the cobwebs and the 16-mile stretch of the Cleveland Way National from Scarborough to Robin Hood’s Bay is a scenic showstopper.


Scenic sights along the Cleveland Way. Photo by Steve Hare
A new experience compared to the buzz and bustle of Scarborough, the trek is worth every post-walk ache after the myriad of steep steps.

Highlights include the ponds of Scalby Lodge Farm acting as a magnet for several breeding species including wildfowl and waders. Points of interest include Long Nab coastguard station and mine shelter which protected coastguards who kept watch for mines or torpedoes during WW2.

A great pit stop is the National Trust cafe at Ravenscar Visitor Centre and its mouth-watering cakes. Arriving at Robin Hood’s Bay is a sense of achievement toasted by alcoholic refreshment for weary walkers to anesthetise their throbbing legs and calves. There is also a good bus service to take you back to Scarborough.

Having completed it in sunnier climes, the sheeting rain and slippery mud halted our progress this time. Heading inland to the picturesque village of Cloughton, we walked back into Scarborough with our drenched but content golden retriever, Bracken.


Captivating coastline for all year round walks. Photo by Steve Hare
Another coastal classic, which is less testing but an equally captivating cliff walk, is a picturesque 7 mile stretch of the Cleveland Way from Scarborough’s iconic Spa - where spa waters were discovered in the 17th century - to Filey.

Taking walkers along cliff edges for most of the way, it passes Filey’s famous Brigg, weaving round the Yorkshire Wolds Way and down to the award-winning shore. We’ve previously thoroughly enjoyed this twice, and again, taken advantage of the regular bus service.

Scarborough’s raft of restaurants ranges from budget to top class. Our favourite, which we’ve frequented for at least a decade, is Cafe Fish where genial and eccentric host, William Bell offers a menu of laughter, fuss and fish.

A true raconteur, he regales customers with far-fetched fishy tales in the convivial ambiance. The variety of seafood extravaganza is scrumptious with the oysters sprinkled with vodka highly recommended along with the monkfish and Dover sole.

For a true seafood feast peppered with laughs and fun, this is a must.


Scrumptious seafood suppers at Cafe Fish. Photo by Steve Hare
A fantastic find on the sea front at Royal Albert Drive is The Watermark Cafe, a packed, dog-friendly and licensed venue dishing up great breakfasts, lunches and light meals and more substantial meals. A window seat watching the surfers skimming the enormous waves while savouring scrambled eggs was among the weekend’s highlights.

For more up market dining in a stylish country house, Wrea Head Hall Country House Hotel and Restaurant befits a special occasion for dressing up and enjoying the elegant surroundings.

Scarborough’s past unearths a wealth of treasures. Its historic castle, a former medieval Royal fortress, dominates the town from its rocky promontory overlooking the North Sea.

Classic 19th century novelist and poet Anne Bronte is buried in St Mary’s Church - and the South Cliff lift was the UK’s first funicular railway when it opened in 1875.

A magnificent landmark whose walls could no doubt reveal many eye-opening tales is The Grand Hotel. Towering over St Nicholas Cliff it was hailed as ‘the largest and handsomest hotel in Europe on its opening in 1867.

At the centre of speculation, The Daily Express recently claimed that Hitler was so enchanted with its grandeur that, if invaded Britain, he planned to convert it into his personal palace, sweeping his lover Eva Braun off her feet round the beautiful ballroom.


Glory days: The Grand Hotel was Europe’s finest in its heyday. Photo by Steve Hare
Enjoying its heyday in the Victorian period, its V shape was in honour of Queen Victoria. Although the days of its former glory are long gone, it retains a faded feel of former grandeur, offering very reasonably priced accommodation with nightly bingo and cabaret.

A highlight is braving the elements and taking in the spectacular sweep of seaside views from the top balcony open to guests and non-guests.

Whatever the season, Scarborough is a magnet which keeps visitors craving for more. After a 40-hourfleeting stay through wild winds, persistent showers and a beautiful rainbow symbolising the sunshine after the rain - we returned home feeling invigorated and fired up for the week ahead.


New Horizons: the sunshine after the rain. Photo by Steve Har