Simple Minds
Whoever thought of teaming up The Stranglers to support Simple Minds was on to a good idea: both acts appeal to the same generation and it resulted in a great night of two acts who can still cut it live.

The Stranglers are still "the men in black", dressed head to toe in black, they now may have only two of the original members in the band but they are still as menacing as ever. Keyboard player Dave Greenfield nowadays looks like a retired professor sat behind his keyboards whilst original bass player Jean Jacques Burnel might be going grey but he still does those famous leg movements. Baz Warne has fit into the roll of lead singer with ease. With songs such as Always The Sun and No More Hero's it was a pleasure to see and hear that the group are still going strong. 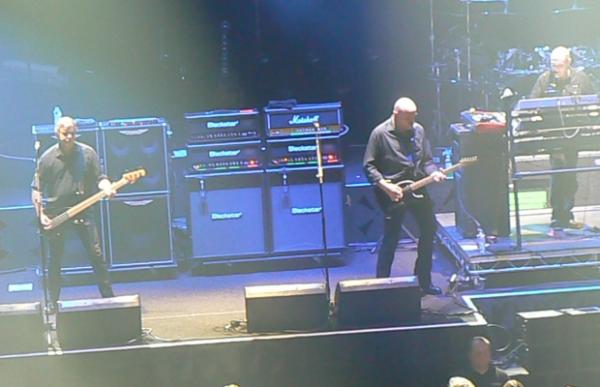 The Stranglers
Simple Minds toured the UK earlier this year playing theatres on the back of what was one of the best albums of their career, Big Music. Such was the demand to see them they played some arena gigs which visited Leeds Arena.

"Hello Leeds, we've played some great gigs in Leeds and we're going to give you 100% tonight" announces lead singer Jim Kerr. It is hard to forget that back in the mid 1980s the band were as big as U2 and played to over 80,000 fans at the Milton Keynes Bowl when they headlined 2 huge gigs there.

Wearing a scarf and looking dapper, Kerr looked slimmer and fitter than he has done in the past, it must be all the touring or the lack of pasta he is missing from his home in Sicily!


Simple Minds
The current touring line up has two adept female singers including Sarah Brown and Catherine AD who also plays keyboards and guitar, both added to the sound of the band immensely and added a new dimension. Kerr's duet with Sarah Brown on Book of Brilliant Things sounded excellent and was one of the highlights of the night.

On this tour they played quite a lot of tracks that they omitted to sing on the spring tour: Promised You A Miracle was probably one the fans had requested them to play on this tour. Surprisingly they slip in their biggest hit, Don't You Forget About Me midway through the gig, they had the confidence that their other tracks were able to keep the atmosphere high later on.


Simple Minds
It was guitarist Charlie Burchill's birthday so the fans sang an impromptu Happy Birthday to him, the Leeds audience gave him and the band their full enthusiastic support too, what a way to celebrate a birthday.

As well as being a greatest hits set tracks off the superb new album, Big Music were featured with the title track and Honest Town sounding brilliant.

They finished the gig on a high as always, Alive and Kicking might be the title of one of their hits but it sums up the band perfectly: still alive and kicking.