Northern Walks: The Parish Of Bradfield

The parish of Bradfield is situated just south of Bolsterstone and Ewden Village, effectively in the top right-hand corner of the Peak District. It is reachable by car via the A629 from Huddersfield, passing through the village of Oughtibridge.

If you set your satnav for Delf Road, there is perfect parking midway on your left in a layby. The layby is easy to spot – not very salubrious, but look out for a red waste bin!

Walk up Delf Road a short distance, with the treeline on your right, then take the first left into a field. The route is signposted.

Follow the route through the fields, downhill to Brown House Lane in High Bradfield.

It’s worth continuing down the cobbles of Jane Street for a taste of the area, including the Old Post Office (1835, grade II listed) and St Nicholas Church (c1480, grade I listed). You will also pass The Old Horns Inn and the old Bradfield Parish Workhouse opposite (1759-1847), now converted into private houses.


“Castle Hill is a possible medieval earth and timber ringwork fortress. Standing on the edge of a high escarpment and encased by the remains of a ditch, the partial rectangular ringwork merges with the steep southern scarp of the ridge. It is said that a keep was still visible in 1819 but this was possibly just the high remains of ramparts of heaped stone. Extensively quarried, the damaged earthwork is now confused and is perhaps just a hill in Castle Field” (Castleuk.net, 2019).
Continue up Brown House Lane. (Here you can continue up onto Loxley Lane for a short detour to Bradfield Brewery, if interested. Also of note, behind the brewery, is the site of Castle Hill*, a former Saxon encampment. Alternatively, head right down Woodfall Lane to continue the walk.)

Halfway down Woodfall Lane, take the public footpath up a short series of stone steps into a field. Follow the route down through the field to Lamb Hill road. Take a right here, passing the conduit bridge and Smithy Garage on your left. Where the road forks, take the left-hand route down Smithy Bridge Road, leading to Smithy Bridge itself.


Smithy Bridge
At the junction you will see a sign for The Schoolrooms, where the café and farm shop are definitely worth a visit! There is also a set of wooden gates, leading to a picnic area, where you can get a better view of the packhorse bridge, and a chance to say “Hello” to some ducks!


Damflask Reservoir
Head down Mill Lee Road and take your next left at New Road, heading up. Take your next left down School Lane, then take a right where a footpath runs parallel to the waterway. This route runs all the way down to Damflask Reservoir. As the route reaches the right hand-hand tip of the reservoir, leave the path, taking a right through the gap in the fence. Continue straight on along the pavement for a short distance until you see a set of wooden gates on your right. Cross the road here, then take the signposted footpath.


Edgefield Obelisk
Keep to the footpath, crossing Ughill Brook, then climb a short series of steps to Ughill Wood Lane. Turn left and head down the road, turning right at Tinker Bottom road. Take your next right up Ughill Road where a sign point the way to Bradfield. Continue all the way to Hoar Stones Road, then take a left.

You will shortly see a Edgefield Obelisk on your right. This is a grade II listed monument, sadly “erected after a child drowned here in 1832” (Theasby, 2019).

You will eventually pass a house and area of woodland on your left. Here you will see the beginnings of Gibraltar Rocks – popular with climbers – which climb all the way to the hilltop beyond.

The Gibraltar Rocks formation is in no way related to the famous Rock of Gibraltar, by the way! You haven’t inadvertently wandered through a rent in the space-time continuum and ended up on Spain’s south coast … But watch out for macaques, just in case!


Boots Folly
Follow Hoar Stones Road all the way down to Sugworth Road and turn right. Continue uphill until the road levels out. You will then see a footpath on your right leading right downhill to Boot’s Tower.

“Boot’s Folly, Strines Tower or Sugworth Tower was built in 1927 by Charles Boot the son of the founder of local construction company Henry Boot PLC. Henry Boot & Sons was founded in 1886 and helped by the success of civil building contracts and building camps for the military during the 1914-18 war” (Peaked Interest, 2019). If you venture inside, don’t go with your boots on. That would be folly! Boom-tish. 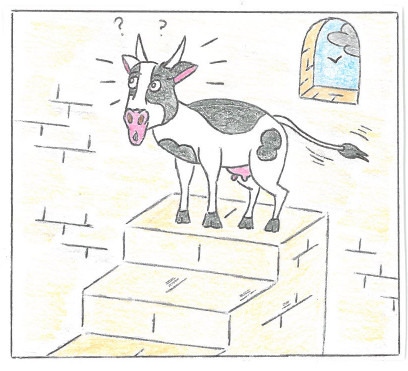 A cow trapped inside a folly. Folly indeed!
A spiral staircase was allegedly removed from the tower after a cow became trapped inside! The tower, sadly, is now derelict.

Behind the tower, the hill slopes downward, and from this vantage point there is a good view of Strines Reservoir, constructed 1871. Don’t venture down to the reservoir though, as there is no public access. “The name Strines dates from as early as the 13th century when it was mentioned in the Sheffield Court records as Water of the … Strnyds … referring to the stream which rose on the moors at the top end of Bradfield Dale and flowed down to join the River Loxley at Low Bradfield … [T]he word “strynds” … may be defined as a rivulet or stream” (Google Books, 2019).

Take the right-hand route, leaving the tower and Strines Reservoir behind. The route eventually leads down to Dale Dike Reservoir.

Shortly after its construction in 1864, the dam at Dale Dike Reservoir collapsed, causing the Great Sheffield Flood. Also of note, on the opposite bank of Dale Dike Reservoir, is Hallfield House (grade II listed, c1318 and part of the Wentworth Estate).

Follow the route up from the reservoir to Dale Road. Take a right, head down a short distance, then take the left-hand path leading uphill off the road. Go right where the footpath forks. Don’t continue uphill to Mortimer Road as the traffic there is deadly!

Oh, the irony! Named after Han Winthrop Mortimer, Lord of the Manor of Bamford, the road was constructed in 1777 as an intended money-spinner, with turnpikes instated along the way. Sadly it didn’t turn out to be a lucrative enterprise, the route proving too hilly for stagecoaches. If he were alive today, however, Mortimer would be a millionaire, as the road never sleeps! It is also an accident black spot, as wall damage and shrapnel from damaged vehicles will attest; so steer clear for safety’s sake!

Turn left at the lane and head down to Windy Bank road. Next take the left hand route, signposted, through the metal gate, and follow the westward route to the tip of the reservoir and Agden Bog Nature Reserve.

Soon you will see a break in the wall and a signposted public footpath leading uphill into woodland. The route will lead you up to Bailey Wood and the site of a Norman motte-and-bailey castle.

The most obvious visible feature of the site as it now stands is the large conical mound 18.5m in height, with a small, disturbed summit, the whole surrounded by a shallow ditch 1.5-3 m deep … It was very probably a castle of the de Furnivals in the twelfth century” (Davies, 2019).


St Nicholas Church
Backtrack a little and take the left-hand public footpath, leading out of the wood and back to St Nicholas’ Church in High Bradfield. From here you can retrace your steps to the parking lay-by.

Alternatively, if you fancy staying in the area for dinner, The Plough in Low Bradfield comes highly recommended!

The Plough in Low Bradfield