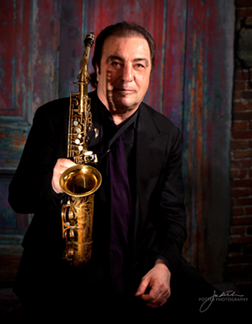 Greg Abate
The first time that I heard American jazz legend Greg Abate perform was in July at Llandudno Jazz Festival and it was raining hard. The next time was at Roundhay Golf Club and unfortunately the weather was no better. Nevertheless, while his opinion of English weather cannot be very high, everyone who sees Greg play cannot fail to agree that he is a saxophone maestro.

Accompanied by the Adrian Knowles Trio, Greg's first set included two numbers that proved that he is also a virtuoso of the flute. His flute pieces included 'Hazy Moon' a "jazz waltz" and the second tune a samba/bossa nova. Andy Chollerton sat in for Jason Scott on the electronic keyboard and did a fine job tickling the ivories.

Uptempo numbers were interspersed with more soulful melodies and the ballad 'Angel Eyes' was particularly moving. He wove together jazz standards by Charlie Parker and Artie Shaw with 'Inner Urge', a track from his new album Gratitude. John Settle on drums and Adrian Knowles on the bass helped to create a wonderful deep, rich sound.

At seventy two, Greg's energy and enthusiasm for performing are boundless. This is his second tour of the UK in five months and when not performing, back in the USA he is a music tutor. His first ever paying job was with the late great Ray Charles Orchestra playing alto sax. Then he played tenor sax with no other than Artie Shaw. Since then he has simply gone from strength to strength. One of my jazz aficionado companions commented that he "makes the saxophone look like it is playing itself".


Also by Claire Shaw...
What Did You Do In Lockdown 3: How To Market An ebookWhat Did You Do In Lockdown 2: How To Publish An ebookWhat Did You Do In Lockdown: How To Write An ebookReview: The Miseducation Of Evie Epworth By Matson TaylorThe Great Face Mask Debate
It was great to see a healthy crowd of fans at The Bar on Park Lane (Roundhay Golf Club) supporting jazz in the north and keeping it alive. Tickets for the gig were a very reasonable £10. Live music and jazz do seem to be under threat and to encourage a younger audience to keep this art form alive, under 25s are only required to pay half price for tickets. No one could deny that this is an absolute bargain when such musical artistry from all performers is on show.

Jazz Leeds hosted the event and can call on three venues for its eclectic mix of live jazz performances. Check out what's on in Chapel Allerton, at Seven Arts and Inkwell Arts centres.

If you would like to experience the magic of Greg Abate before he flies back to the east coast of the USA, you are in luck. He will be playing with the Pete Rosser Trio on Friday 22 November at Wakefield Sports Club. I just hope that the weather is better for him this time!