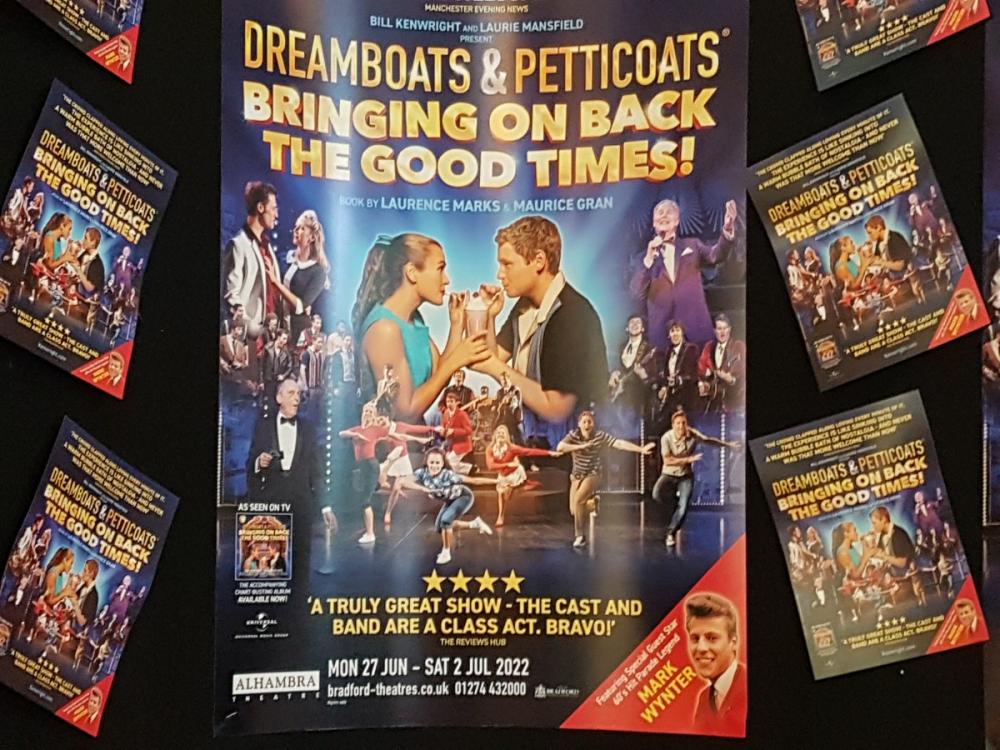 There was either a technical problem or someone’s getting slack, but last night’s Alhambra show, Dreamboats and Petticoats Bringing On Back The Good Times, turned into a cringeworthy nightmare as the sound went to pot leaving actors vulnerable on stage.

The ‘Dreamboats’ franchise, courtesy of Director & Producer, Bill Kenwright, has been running for many years and, indeed, I can remember the leading lady, Elizabeth Carter (Laura) treading the boards in this show as far back as 2017.However, this is the poorest production I have seen yet. It was full of energy and enthusiasm, driven forward by a talented young cast but this time, someone other than the cast let the side down, namely the sound technicians and production team leaving players to carry the can. Body microphones across the stage, were consistently late coming in. Appalling.

And for fear of maligning St George’s Hall – certainly not my intention – this felt like a ‘small’ production, a ‘concert’ almost, that should not have been gracing the stage of a grade one theatre like the Alhambra, used to hosting the likes of The Lion King, Mary Poppins and such like.Choreography was sloppy in parts and certain excellent dancers outshined those who weren’t so excellent, which merely drew your eye to the weaker links. It felt under rehearsed in parts with sloppy arms and movement.

The cheesy story line is almost non-existent – which I can live with – because the libretto such as it is, is merely there to provide song opportunities: and there were plenty from the 60’s which the audience loved.

But, more than anything, I felt let down by this specific production because it felt as if it was just there to make money. Every show is BUT, you have to give value and this one didn’t.

There were some hugely talented individuals on the stage - actors, singers and multi instrumentalists - but costume changes were at a minimum – as were the sets – Mark Wynter at 79 felt too old to be anchoring a medley, even though he was a ‘star’ in his heyday, and overall, I was underwhelmed and waiting for the end.This is a show that’s got too big for its boots and become complacent. It showed last night. Time for someone to ask some questions I fear.