Bidding Chaos Welcome: As Best We Can By Jeffrey Wainwright

In another tonal volte face, Jeffrey Wainwright blindsides his audience with what feels like a valedictory: As Best We Can rediscovers the past through the medium of observation, dream, reflection. Yet we may trace the making of the poet in the interstices - this wonderfully rich journey through autobiographical heart-land is not historiography in the manner of so much of Wainwright’s oeuvre, but it does bear the shadow of his concerns in the gentle ebb of rhythm, of metrical sonority, and of confidence in the empathic connotations of rootedness. This poet remains ideologically anchored through his depiction of poverty, of love and of the casual relationships and injustices of post war working class suburbia.

And if the camera of his imagination refuses to hold memory in one place – he proposes a feast of impressions which flow both in from and out of the artefact or landscape observed – we sense everywhere the passing nature of the otherwise commonplace and tangible. The collection’s title suggests a coping mechanism, an honourably wise strategy of survival founded in the crucible of experience. Brought to bear on the unstable centre of contemplation – the essential, exquisite peculiarity of simple things, the waking newness of renewed vision, the mystery of mass, of how objects are – Wainwright’s astonished gaze delves deep into the lake, the canal, and the hinterland of his origin as though newly discovered. And we discover, in the variegated focus of his dreaming, the origin, too, of a poetics.

Here, Wainwright is a poet of the conditional: the nineteen forties and fifties austerity of his envisioning – the imageries of an autobiographical Stoke are filtered as though through a waking dream – is as tentative as his formal approach. Uncertainty abounds as if blindfolded: ‘but what is the plan?’, ‘but at least which way is up or out’, ‘I look to Dorothy / and am at a loss’, ‘this time / I don’t know who we are’. Memory refuses to hold still as the poet finds a way down blind alleys, into a negotiated past of conflated recollection.

Many of these poems will have been in gestation long before Covid-19 emerged, of course, but Wainwright’s conditional tone does yield the impression of mirroring uncertain times. The speculative impressionism of the longer poems dislocates time and place as though the process of inhabiting a simultaneity of spaces – say New York and Stoke - were as natural as breathing. Which in one sense it is – each memory has a claim to parity in experiential terms: we are reminded of Tony Harrison’s fireside reverie, and that Newcastle and Peru are approximal through the prism of reflection.

For Tony Harrison’s vivid power of recall, decanted in an undiluted but emotionally-complex demotic, finds a more than passing echo in As Best We Can. Nearly co-terminous in age, both schooled at Leeds University, the poets’ share a resolute affinity with the cultures which respectively shaped them. And both portray the convolutions of the domestic dynamic as though constant re-rehearsal of past events was a precondition of commemoration. In the very beautiful ‘My Father and “The Onward tendency”’, Wainwright’s father, who here and frequently elsewhere in this iterative volume, is of a disposition that will not succumb to disorder, will not ‘bid chaos welcome’, measures success by the yardsticks of knowledge and self-reliance. The father’s escape from the pit is facilitated by his ability to master Arithmetic; the son’s passage into the Arts is similarly uncircumscribed in a new and hopeful era of urban, physical and intellectual re-birth, where ‘best tinned fruit’ is about to replace polio:

‘It was not much, but better,
and if I could master long-division
and the rest I might be a Dr. Salk or another of the heroes
by whose deeds children are plucked
from iron lungs and fearsome calipers,
saved by sun-lamps and the proton-beam.’

And here we find the political in hyper-detailed reflection: the nascent health and welfare services provide the backdrop to this rebuilding of the poet’s past. Wainwright’s access of love is only half-contained in the grey quotidian, and we remember the similarly grey, image-less men in nondescript suits who often smoked pipes, and wrote the future in a new language of cross-sectional empathy.

The process of reaching back is thoughtfully negotiated in a book which is everywhere shadowed by the unreliability of memory, occasioning a compulsion to reimagine the past, or to insinuate ‘actors’, ghosts, into its mutable tableaux. The long series of vignettes which make up ‘Dreams of Lennox Road’ perform a service to commemoration in a quiet conversation whose loose metrical arrangement supports backward reflection. Tentative, movingly executed, Wainwright’s realisation of the furniture of dreams is both immersive and desperate for connection, revisiting childhood scenes whilst sifting the authentic and the specious in a delightfully mixed colander. The result is as ingredient-rich and as satisfying in its retrieval of memories as the synoptic distillation of a sonnet. No more so than when dreams slip and familial figures retreat into darkness in a moving parallel to the actuality of death, preceded by the occluding suggestion of dementia:

‘then my mother, piano piano through weeks
of who knows what kind of sleep
or wakefulness, until, one afternoon, out of the sun
she slid away, leaving her body
which carried on changing anyway’. 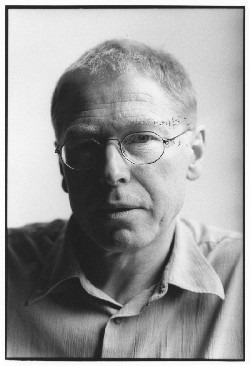 Jeffrey Wainwright
Suggestion is the key to Jeffrey Wainwright’s assembling of mental pictures - the application of several ways of seeing, often in one poem, as though concentration was subject to the ‘multiplying eye’ of a natural division. Here, the poet’s observational focus glitters as it alights, opening doors to the prospect of temporal faultlines and widening, immeasurably, the lyrical and semantic possibilities of a day or night’s dream. The water’s still, ‘leaden’ surface in ‘The Lake’ is one aspect perceived from many angles; it is the conduit to a fabulous accrual of detail whose meaning dissolves at point of engagement, its submerged village as elusive as the past of which it forms a part. It is a rare conceit to see a poet questioning his own perception as a poem progresses, but here we are pulled up short by the misplacing of common locators. And in repeated sestets, he finds the perfect form length for individual reflections of transfixing beauty, in a landscape whose art refuses to give up its secrets entire:

‘Dusk. Along the skyline a lemon-yellow
sunset turning orange. A solitary light,
high in the trees, comes on, the first to ward off
the fearsome dark. Then others follow,
clutching at their own relief
until only the lake is blackness.’


Also by Steve Whitaker...
Poem Of The Week:Owdham Footbo' By Ammon Wrigley (1861-1946)Poem Of The Week: The Wireless By Jean StevensBurned By Light: Dovetailing - Gathered NotesNight Swimming:Towards A General Theory Of Love By Clare ShawPoem of the Week: 'Together' By Robert Gibson
The kind of art Wainwright brings to perception is repeated in a different manner in another series of meditations, ‘Drawing Lessons’, whose title is as totemic as an open vein. Here, the poet wrestles with several epithets from John Ruskin’s The Elements of Drawing, whilst qualifying the latter’s suggestion that the artist is confounded at every turn by the intractable nature of his medium - as intractable, in fact, as the natural landscape of Wainwright’s imagining. His luminous responses to the artist’s subject reflect the workings of a mind as joyously stymied by the evanescence of line, form and appearance as the perceiver of a lake, a tree, or a street viewed at a skewed angle in dream or memory. The poet’s sense of distortion, and of the strange in the everyday, makes of ‘Drawing Lessons’ a palimpsest of a more general uncertainty. And in this dialogue of one, conceived in different linguistic measures – he moves from the high-Victoriana of Ruskin’s prose to the demotic of his own youth - the questing in the undergrowth for that which reconciles past with present, truth with appearance, is suddenly achieved in backlit glimpses. The antagonistic ‘Verticals, horizontals, diagonals’ of natural form are resolved in the light of mental effort:

‘The best answerer of questions is perseverance,
That will not be of the saintly kind
But that through wind and weather, all I am allowed
To help me seek whatever waits inside the light.’

The mass of stone which gave rise to Michelangelo’s David must have demanded superhuman imaginative effort on the part of the sculptor. The synthesis of will and perseverance which relieved Wainwright’s father of work in subterranean darkness underpins his son’s preoccupation with light in a volume which expands to fill space with contemplation; to cleave towards illumination is to embrace, or at least to accommodate, uncertain perception, not least in an age finally divested of the comfort-giving ‘moth-eaten musical brocade’ of religious observance. The poet’s fond (and funny) elegy for his mother in ‘Who Was St. Chad’ is as loving as it is secularly detached.

And if we are to take a single image away from this ultimately hopeful book, it is fitting that it should be infused with a sense of continuity in the ordinary. Wainwright’s visionary final lines in ‘Signs of Life’ offer us a world which will strive and unfold, in despite:

‘trees have grandeur, nothing less,
cicadas stopping and starting in unison,
spiders risking all,
some wrapping-paper blown about the street,
a baker riding pillion home.’

As Best We Can is a defining poetic moment of 2020.


As Best We Can is published by Carcanet
More information here: https://www.carcanet.co.uk/cgi-bin/indexer?product=9781784109882