An Audience With Spike From The Quireboys Comes To Bradford 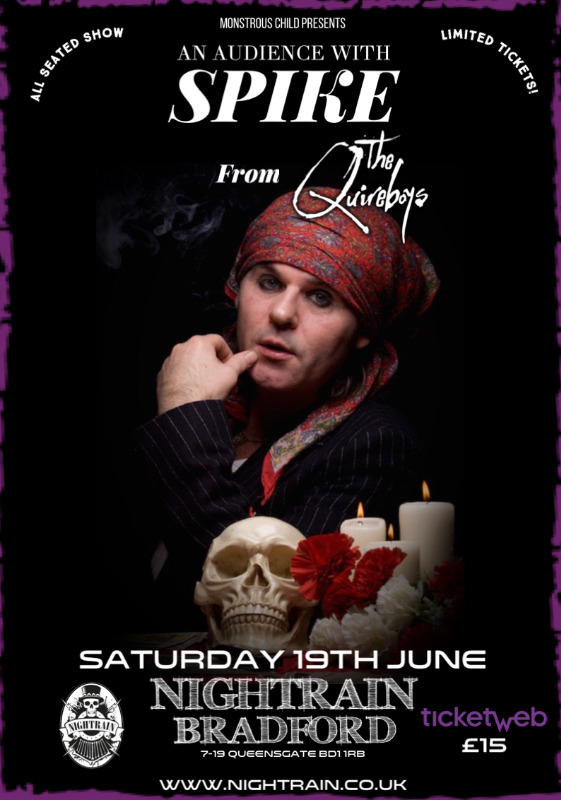 Back around the late 80’s and early 90’s British rock outfit The Quireboys were regulars on Top of the Pops. Their singles such as Hey You, I Don’t Love You Anymore and 7 o’ Clock were mainstays in the British charts

Mixed with the blues and rock of The Faces, along with contemporary rock, the band often played sold out gigs in Yorkshire. For those who attended the Queens Hall gigs in Bradford they will recall how The Quireboys were one of the best live rock acts around.

The band even supported The Rolling Stones at St James Park, Newcastle - the home town of lead singer Spike.

At the height of their success The Quireboys were managed by Sharon Osbourne, though I am not sure if the band ever supported Ozzy Osbourne!

The opportunity for fans to spend a night hearing stories about a band’s career seems to be in fashion at the moment: Bruce Dickinson lead singer from Iron Maiden is taking his one man spoken word tour on the road in the summer as are Danny and Luke from Thunder who are also following the trend in the autumn.


Also by Graham Clark...
Paco Versailles - DancemencoA Taste Of Italy ....In CollinghamYorkshire Gets To Share The Stage At The Brit Awards Ahead Of NHS Charity Single ReleaseJack Savoretti. No Longer Singing To StrangersRag ‘N’ Bone Man - Life By Misadventure
Spike said:
“This is a socially distanced show and we take it very seriously. This is a great opportunity to play to a limited number of fans in an almost parlour like atmosphere. It is very much a show where the audience can get involved."

The one-man show will comprise of two 45-minute sets on a stage stripped down to the singer, his guitar, songs and stories. Spike will illustrate the highs and lows of his wild life in rock ‘n’ roll in tales that take an honest look at the modern-day musical circus. Fans will have the chance to ask Spike questions and he’ll meet everyone in a socially distanced manner

Spike will be appearing in an all seated show at Nightrain in Bradford on Saturday 19 June.

Tickets priced at £15.00 are available from:
https://www.ticketweb.uk/event/an-audience-with-spike-from-nightrain-tickets/10982085