Yorkshire Times
A Voice of the North
frontpagebusinessartscarslifestylefamilytravelsportsscitechnaturefictionwhatson
No cookies. No tracking. No advertising.
arts 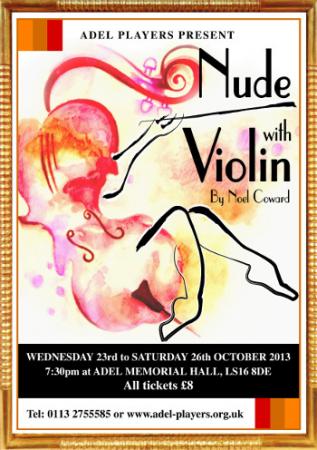 Adel Players will be making an exhibition of themselves once again when they perform Noel Coward's hilarious comedy 'Nude With Violin'.

The play, set in Paris in 1954, is something of a lost masterpiece from the Coward collection, packed full of colourful characters and drawing upon a healthy scepticism of modern art. The famous painter Paul Sorodin has passed away, but what was the secret of his success? With wit and good humour, the truth is revealed...

Theatregoers are invited to view the scene in Sorodin's studio at Adel Memorial Hall, LS16 8DE, from Wednesday 23 to Saturday 26 October (starts 7.30pm).

Adel Players' last production - 'Ghosts', by Henrik Ibsen - was recently honoured by the Wharfedale Festival of Theatre with three awards, including the prestigious William Whiteley Salver for Best Play. Earlier in 2013, the group's sold-out run of Alan Ayckbourn's 'Bedroom Farce' was "full of laughter, fun and warmth" (Adel Bells magazine).

Tickets for 'Nude With Violin', which is directed by Dianne Newby, cost £8. Bookings can be made on (0113) 275 5585, or via the group's website at www.adel-players.org.uk, where directions and other useful information can also be found.