Not only did he remain true to the venue’s ethos of producing contemporary theatre that reflects what’s going on in society around it, but he also explored challenging themes whilst leaving the audience uplifted and thoughtful.

That’s a tough call and, in truth, I think it is the only Connecting Voices production to date that has pulled off this near impossible task.

Equally Krapp’s Last Tape was a little short on levity despite its ‘truth’. Both explored themes of loneliness – undoubtedly current in these difficult times - but both left you with a sigh in your heart.


Testament in Orpheus in the Record Shop. Photo credit Anthony Robling
By contrast, Testament’s Orpheus in the Record Shop, utilised music, cleverly combining classical musicians from Opera North with Beatbox dexterity, to produce a truly unique evening, that not only enthralled from the start, but still managed to explore contemporary themes whilst leaving the audience cheering 70 minutes later. He felt like a performer in touch with his audience’s needs.

Orpheus runs a record shop, Justine has left him and headed to Italy breaking his heart. He lives in the past but realises that this is not good. Then he has an epiphany and starts to appreciate that life is about the now: ‘Don’t look back. She’s gone. Everyone is here!” he says.

But at that point he didn’t leave it. Lighting Designer, Jason Addison’s light plot changes to warm, yellow colours, the musical mood lifts and we’re all on the player's side. He's won us over and left us feeling happy for him and happy inside. Great show. You’ve got until October 17th to check it out. 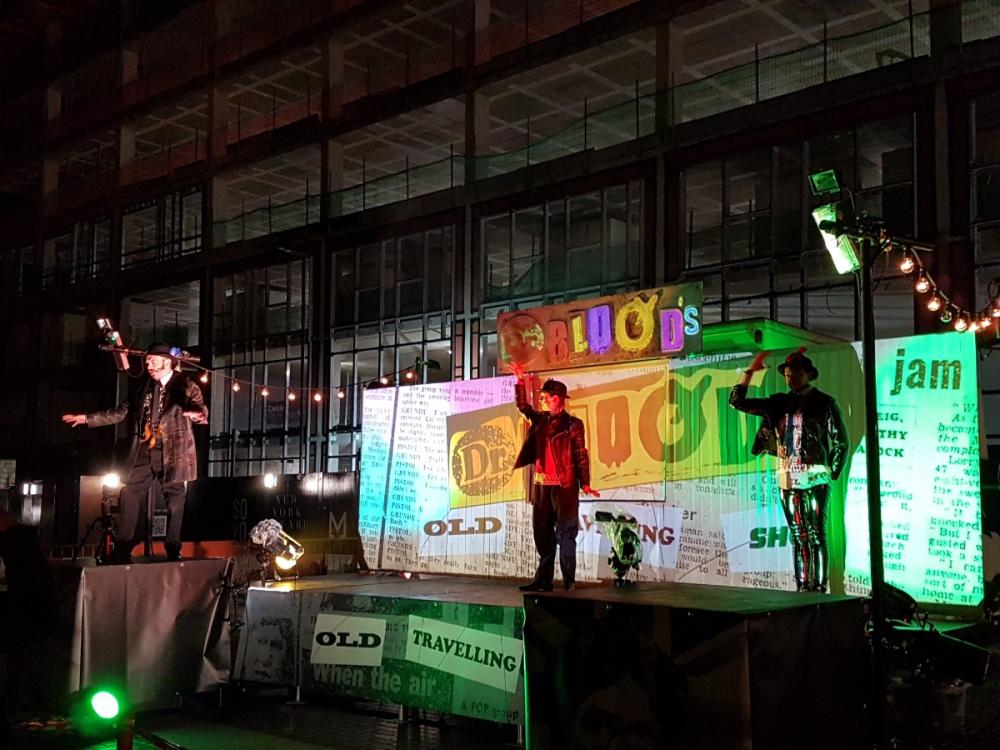 Imitating The Dog's horrific tale of greed and immorality.
Imitating the Dog’s offering on Thursday – Dr Blood’s Old Travelling Show – was all of 30 minutes and outside. Much more raucous than any of the other Connecting Voices offerings – and somewhat chillier in more ways than one! - but curiously entertaining despite its initial chaotic form of storytelling.

Much of the methodology was explored some months back in the company’s other production, Night of the Living Dead, in which Imitating the Dog experimented with the use of video cameras, dolls and mini props as a way of telling their story. And it is inventive, indeed clever but, initially, takes some assimilating in the extended chaos as you look to dolls, humans and video screens to figure out what's going on!

Written and directed by the company’s co-artistic directors Andrew Quick and Pete Brooks, I didn’t initially know what to make of this crazy tale of mischief, immorality and long-buried secrets. Once again in the ‘horror’ tradition, as was Night of the Living Dead, Dr Blood and his motley crew tell a tale of the price paid for pursuing ambition, hypocrisy and greed.

Laura Atherton, Matt Prendergast and Keicha Greenidge spearhead this unique production. They had me wondering at the outset but, by curtain down, they’d won me over. Fun and Faustish!